This Would Be Funnier If It Happened To You 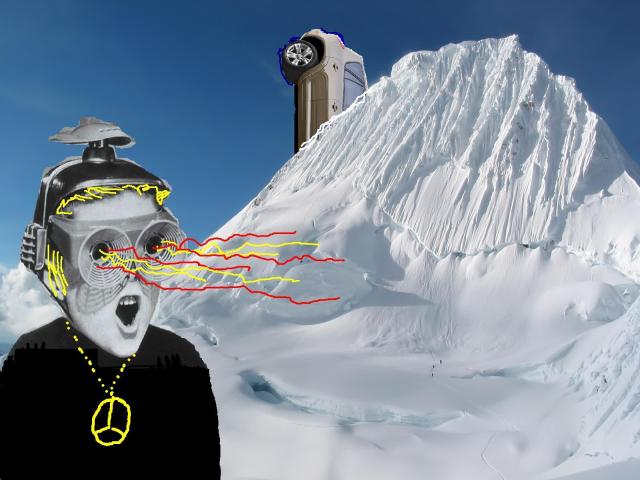 That famous adage is oh, so true.  So is this one that I just made up:

Tragedy + it happens to somebody else = comedy

That’s the basis of all those Funniest Home Video shows.  Bozo The Clown kicking some poor schmo in the gonads is the kind of material that leaves folks rolling in the aisles.  Does the guy on the receiving end think it’s funny?  Not so much, even if the foot delivering it is encased in a bright red, size 20 clown shoe.

Bad stuff is funny when it happens to somebody else.  Case in point:

Our palatial country estate has a steep driveway.  That’s a great feature because it guarantees that only the most biblical of floods will ever reach the house.

OK, I lied.  It is not great.  There is nothing great about our driveway.  That was my attempt to “look on the bright side”, something that positive-outlook doofi (plural of “doofus”) are always chirping at me to do.  In reality, in the winter, our steep driveway stinks so bad I can’t even begin to convey the foulness of the stench.

You might assume that those who live in the American Midwest, a part of the world that routinely gets snow, would invest in snow removal equipment.  Not us.  We put our trust in Al Gore and assumed that global warming would keep the driveway ice-free.   In the Super-Sucky Year Of Soul Destroying Cold and Snow (as future generations will call this winter), Al let us down.

We had a little snowstorm last weekend.  It shut down most of the town and all the surrounding roads.  “No reason for me not to run errands,” I said smugly to myself, “because my car has 4-wheel drive.”  I backed down the driveway bright and early Saturday morning.  Or where I thought the driveway was.  Turns out it’s not so easy to FIND the driveway when it has not been plowed.  I ended up buried in the snow in the middle of my yard.

It was that great packing snow that’s just perfect for making snowmen.  And making forts.  And making snowballs.  And making all 4 wheels and the entire undercarriage of my car so stuck that I would not be able to get out until Spring….of 2015.

I’ve lived in the Midwest my whole life, so I knew just what to do:

By this point snow covered me from head to toe, outside and inside my clothing.  I stomped around the car like I was doing a ceremonial snow dance to a vengeful god.  I was so livid with anger and frustration that it is a testament to my good health that I didn’t stroke out right there.  Then the flames shooting out of my eyes melted all the snow around me and I breezed back up the driveway and got safely in the garage.

Nope.  That did not happen, because real life is not a bad sci-fi movie.

I trudged back up to the house through the mile-high drifts and tried to calm down.  I stopped swearing, resisted the urge to kick the dog and did not storm up to the bedroom and awaken my husband like a screaming banshee from hell, just so I could dump this problem on him. I spent ½ hour doing deep breathing exercises while cleaning out the Tupperware cupboard – therapy with a purpose.  When Bill at last came downstairs, I quietly told him what had occurred without screaming my oft-repeated promise to move to town and leave him to rot in this *$&^!% hole by himself.  He went to the bottom of the hill to take a look.

I figured I was just one of many other village idiots who had decided it would be a good idea to go for a drive during the Snowpocalypse, so I resigned myself to being stuck for at least a couple of days before a tow truck would get to us.

That did not happen.

A big pickup truck  came plowing through the swirling snow on the deserted road like a diesel-powered knight on a white horse.   The driver saw our car, stranded off-road with Bill taking his turn to ineffectually spin the tires, and he stopped to help.   This Angel in Camouflage dug my car out of its snow-packed grave with his own shovel and his own, bare hands.  He got down on his back in the cold fluffy and unscrewed the plastic undercarriage guard-thingy that had been pulled down and was dragging on the ground like a big snow scooper.  He then disappeared as silently as he had appeared, refusing all reward; not coffee, not money, not 15 minutes use of my body.

By now you have probably figured that the moral of this story is that you should never lose hope.  That you can count on the kindness of strangers!  That there are Good Samaritans still walking  on this earth to renew our faith in the Essential Goodness of Man!!!

Nope.  That’s not the lesson.

The bottom line is that this would have been a whole lot funnier if it had happened to you, and not me.  That sort of thing always is.