These Are A Few Of My Favorite Things: London Edition

Me: “I just got back from a trip to London with my daughters.”
Her: “How I envy you – I love London!  The art, the architecture, the history…what did you like best?”

Off with his head!

Me: “Oh, jeez, it’s hard to pick…”
Her: “How about The Tower of London?  Didn’t you love the Crown Jewels?”
Me: “We didn’t actually go IN the Tower.  But I got tons of pictures AROUND it.   When you think of what those ancient stones have witnessed.  And now this. That’s a DUDE.  Wearing capris.  With black socks and shoes?   They should have thrown Dexter Dweebly into the Tower for crimes against fashion.”

Her: “What about Westminster?  To think a place so steeped in history is still a vital part of the working government. Could you imagine working there every day?” 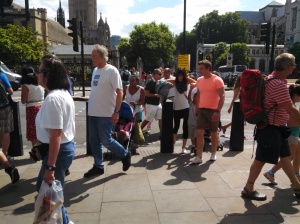 Me: “We were more interested in absorbing the general flavor of the place. Like this picture of Big Ben. Well, near Big Ben. I was 4 miles into my quest for a trash can at this point (which, as it turns out, they don’t have public trash cans because Britanicals are very private and proper, even about their garbage), and Liz stopped on the sidewalk to try get a Wifi connection.  We almost got trampled by the crowd when the little walk-guy light turned green!”

Her: “How did you like the London Eye?”
Me: “That was an amazing sight.”
Her: “You really get a feel for the scope of the city from up there, don’t you?”
Me: “Oh, yeah. I mean, I guess you would.  We didn’t go on it, we just LOOKED at it…from across the river.  I wonder if the carnies running it have better dental work than the carnies in the States?  I always say, if a guy can’t take care of his own teeth, how can you trust he’s gonna take care of a carnival ride that you’re risking your life on?”

Her: “Surely you went to Buckingham Palace for the changing of the guard?”
Me: “For sure! See that horse’s ass in that picture there? No, not her…the white dot above that lady’s head, kinda in the middle? That’s almost definitely one of the palace guards.  Couldn’t really tell from where we were standing. But it was so worth the trip over: changing subway trains twice, hiking down that street with all the construction and traffic and standing cheek-to-sweaty-jowl in the broiling sun along with 100,000 other royal watchers with their cameras and cell-phones held up over their heads in the hopes of getting a picture of SOMEthing…anything.  It felt so personal.” 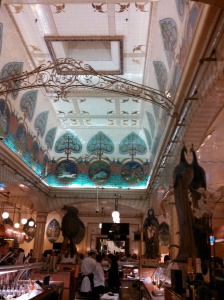 Hot dogs are called tube steaks in a place like this.

Her: “And the Victoria and Albert Museum?  All that wonderful art and history, and it’s free!”
Me: “Ah, the V&A .  Wouldn’t have missed it for the world!  Although, as it happened, we did.  Miss it.  We  popped into Harrods first since it was on the way from the Tube, and I got sidetracked by the meat department.  This ultra-swanky store, and they have a butcher shop inside – have you ever been there?  With the peacocks and the tile mosaics on the ceilings?  It’s the most beautiful thing I ever saw!  I tell you what, if the Piggly Wiggly looked like THAT, I’d be buying ground round just like the Queen, instead of my usual 3-pound chubs of 70/30%  hamburger.”

Her: “You didn’t get to experience the incomparable art scene in London?”

Me: “As if!  Of course we did!  Why, look at this genuine oil painting I bought in Portobello Road. I thought it was a medieval Duke or somebody.  When I got home and showed it to my hubby, he said, right off, “That’s Brad, the Impaler. ” Showed me a picture on the interwebz and, sure enough, it’s the spitting image of the original Dracula.  Imagine him knowing something like that.  I got it as a souvenir for my Mom, but decided to give her some English toffee instead, what with Brad being the personification of cruelty and evil and what-not.”

Her: “Surely you experienced the London theater- Shakespeare at the Globe?  Or one of the fantastic offerings in the West End, like The Phantom of the Opera?”
Me: “No way we would miss the theater.  We were leaning toward some Shakespeare (I had a coupon for 2-for-1 pitchers of Pimms at a club in Soho that was doing a piece called “Two Gentlemen Taming The Shrew As You Like It”), but we decided on the open air theater at Regent’s Park.  They let you bring in your own wine.  And while “The Sound of Music” isn’t British per se, let’s not forget that Julie Andrews, the original star of the movie, definitely is.”

Her: “What about Trafalgar Square? The National Gallery?”
Me: “I remember THAT vividly.  There were so many Italian teenagers on school trips milling about that we could hardly move.  Then we went to this restaurant to buy lunch for a picnic and use the bathroom, and what do you suppose?  “No public bathroom” they said. “Excuse me?” I said. “We’re not the public, we’re customers!  We just spent 20 quiddy-bobbers on sandwiches and weird lemonade in tiny bottles, and that’s more than $30 in real money!”  Still no bathroom.  Did you ever hear of such a thing?” 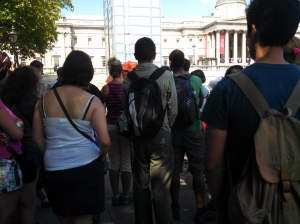 Trafalgar Square. FYI, the bathrooms are right under the porch of the National Gallery, just over the shoulder of that Italian teenager on the right.

Her: “So you didn’t get to The National Gallery?”
Me: “Of course we did!  That’s what I’m trying to tell you.  Even though St. James Park, where we wanted to eat, was in the opposite direction, we had to hike all the way back from the restaurant in the midday sun, across the street, through Trafalgar square and past that tall statue of that really famous and important guy on a horse (I think he was Ricky Nelson), shove our way through the hordes of bored, Italian teens, all the while frying like lemmings in a concrete pan, just to use the bathroom.  The public bathroom was in the basement of the National Gallery!”

Her: “How about St. Paul’s? The Winston Churchill Museum? The Tate? Wimbledon? Surely you took a boat ride on the Thames?”
(Long, rather uncomfortable silence.)
Me: “Did I mention we were only there 4 days?  Including travel time?”

Her: “What DID you think about London?”
Me: “London may not have a lot of Wifi, trash cans or air conditioning, but they DO have Pimms.  And that makes up for everything.”

Special thanks to Billy-boy and Kay-Kay for scheduling the Royal Delivery around my vacation.  I’m pretty sure I’ll be asked to be Godmum, so I’m looking for deals on airfare to go back across the pond for the christening.

Thanks to my girls, Liz and Gwen, for being such good travel buddies.  To my hubby, Bill, for holding down the fort while we were away.  To my cousin, Ann, and her partner, Michael, for hosting us in Bath.  And to all of England, for being so, so spectacular.

Had an elegant time, guvna!

83 Responses to These Are A Few Of My Favorite Things: London Edition