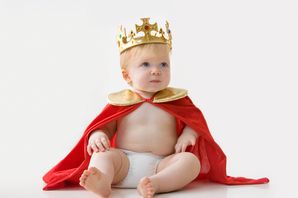 Pip, pip, Huzzah!  The new, baby royal is here.  That’s what we Englandians say when we congratulate our favorite new parents, William and Kate (or as I call them, Billy and Kay-Kay.)  I couldn’t be more proud and happy for their accomplishment, and my own, small part in the success of the Big Event.

Ace reporter Peg-o-Leg here, on the ground in merry old England (otherwise known as the Land of the Rising Sun which beats mercilessly down upon the weary tourist seeking in vain for that fabulous new invention, the AIR CONDITIONER!)   Reuters, CNN, Fox, ABC, BBC, you pick a letter, and they’re here.  Seasoned journalists from around the globe abandoned all attempts at serious news reporting a week ago to descend upon London and await the birth of the royal child.  Which is why there isn’t an hotel to be had anywhere near the palace.   I’m reporting from the town of Bath, 2 hours away from London.

Reaction to the big news has been, shall we say, underwhelming, at least here in Bath.   We didn’t even find out about it until after we got back to the flat tonight after a long, lovely dinner, and that was hours after the Special Delivery.

“Hey” I asked my fellow diners at our fancy restaurant, “Any news on Wee Willy Winky?”  I got nothing.  Our Italian waiter gestured his profound indifference, the Russian table setter shrugged, enigmatically, and the German hostess didn’t even break stride as she marched past to track down our errant salads.   The Bathtonians at the next table murmured “wasn’t he the heir to the Earldom in Sense & Sensibility?”  I kind of thought, when the big moment finally arrived, somebody would leap up on a chair and shout out the news. Then the house would buy everybody a round of drinks and we’d all sway back and forth with our arms around one another’s shoulders, singing God Save The Queen and getting good and pissed (that’s what we UKelelies say when we mean “to enjoy a fermented grain beverage”.)

In a clear deriliction of duty, everybody at our table was too busy enjoying good food, wine and conversation to even surf their computer phones during dinner.   Luddites.

Little What’s-His-Name is only hours old, and already the speculation is intense.  People all over the country are asking, what’s What’s-His-Name’s name?  The world awaits the answer to that important question with baited breath.  But folks better stop baiting their breath and take a big, deep sniff because we may not know the answer for days or even weeks.  That’s the way we do it here.

The House of Lords has to go over to the House of Commons and sneer at them for being common, and then they elect a name.  Then the Prime Minister has to defend the name choice before the Joint Chiefs of the PettiChambers, which means he stands in front of a little podium and the opposing party shouts out questions at him.  He responds, right on the spot, with some pretty witty comebacks, without a speachwriter or a teleprompter or anything besides his own wits. The opposition responds with “pip, pip, huzzahs!”, but in a derogatory tone of voice, and not congratulatory like I was using in my opening.  Then the entire chamber throws bottles and balls studded with nails at the Prime Minister while he tries to duck.  The way we do politics here in Britishville makes Mad Max’s Thunderdome look like a romp in the sandbox.

I have to say, to an outsider, dragging out the naming process looks like typical, elitist  disregard for the welfare of the masses.  By masses I mean the legions of vendors sitting on a huge investment of t-shirts bearing the witticism, “William and Kate had little (insert name here) and all I got was this lousy t-shirt.” Do you think souvenir hungry fans will buy a shirt without that name?  Remembering back to Econ 302 (which came AFTER I aced Econ 301, by the way) about supply and demand, my considered opinion is: no, freakin’ way.

It’s not just the souvenir vendors, though; I have a lot at stake in this birth, personally.  I nailed the weight in the baby pool for His Royal Nappy Filler (yes!), but until they pin down the name, I’ve still got 10 quiddy-bobbers (that’s what we Britanicals call “money”) riding on this.

We’re heading into London tomorrow.  The celebrations are bound to be more intense and it just so happens that we’re going to have a front row seat.Our B&B is only a block from St. Mary’s where the Royal Rug Rat was just brought forth and should be leaving from tomorrow.  Who knows – maybe from our hotel window we’ll be able to see Prince William performing his first, official act as Ducal Daddy: trying to figure out how to get He Who Must Not Be Named into the damn car seat.

My only fear is that the legion of reporters camping out in the neighborhood might bribe the front desk to commandeer our hotel.  We might get there and find that Katie Couric has swiped our room.

52 Responses to The Innocent Abroad