My Knee Jerk Reaction Would Be To Kick You In The Knee, Jerk 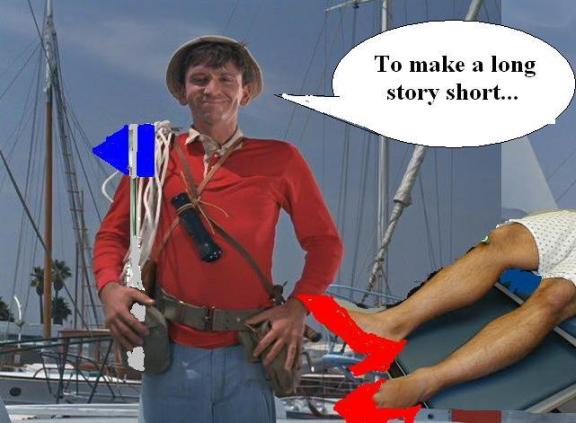 The knee-bone’s connected to the – kicking bone…

My physical reflexes have never been what they once were.  My mental reflexes are probably worse. Yet if a verbal hammer hits a certain spot in my brain, the guy wielding that hammer is probably gonna get a reflexive kick to the gonads.  Metaphorically speaking.

Here are some of the hammers that trip my automatic response.

For The Love Of God, Give Me the Cliffs Notes Version

What they say: To make a long story short…
My response: Too late!

Anyone who says, “to make a long story short” is a big, fat liar.  No story is being shortened.  People who say this (and you know who you are) never do so until AFTER they have already told you the extended-play version of the tale.  Told it in such excruciating detail that you’re getting ready to gnaw your own foot off to escape, like a fox in a trap.

This is my biggest knee-jerk-reaction temptation.  When I hear “to make a long story short”, an answering cry of “too late!” burbles up from the depths of my being. Only iron-willed self control keeps me from shouting it out.  Usually.

Pythagoras Can Bite Me

What they say: The square root of the hypotenuse of a right triangle is equal to the sum of the squares of the remaining two sides.
My response: Not only that, Professor…

This favorite response is homage to the intrepid crew and passengers of the S.S. Minnow.  For those too young to remember Gilligan’s Island, the braineiac Professor never missed an opportunity to use obscure, scientific jargon when plain English would have done just as well.  This was especially true when he was dealing with that simple-minded man/child, Gilligan.   Gilligan would then summarize the Professor’s complicated explanation into one, “see Jane run” kind of sentence.

“Not only that, Professor…” cues the speaker that they might consider restating something in a simpler way.  Or it cues them that I’m a condescending jerk myself.

A couple of teenage boys were standing next to me in a crowd and one casually dropped the f-bomb.  I punched him lightly on the arm and said, “You kiss your mama with that mouth?”   I know, I know; it’s not my business, it’s freedom of speech and I’m lucky he didn’t punch me back.  Luckily, the young man responded as I hoped.  He looked surprised and had the grace to mumble, “Oh, sorry.”

This Tornado Got Any Silver Linings?  Anything? Anything?

What they say:  My husband ran off with my sister, my hound dog ran off with a poodle and my pickup truck died.
My response: Other than that, Mrs. Lincoln, how did you like the play?

It’s a delicate balancing act to be empathetic when someone is going through a rough patch, and I’m not talking about serious situations.   But when confronted with an Eeyore who only talks about the downside of life’s little challenges, sometimes this reduced-to-the-absurd reminder can get them to lighten up a bit.

Sometimes all I get is a blank look when I say “Other than that, Mrs. Lincoln, how did you like the play?”  If they think about it for a while and still don’t get it, they have to add, “I am a slow-witted dolt” to their laundry list of Reasons Why Life Sucks.

Maybe I shouldn’t try to squelch these knee-jerk reactions.  Maybe my funny little responses can help people.  Or maybe they’ll cause the listener to instinctively deliver a swift kick to MY gonads for being such a smart aleck buttinski.

What verbal stimulus sets off your automatic response?

119 Responses to My Knee Jerk Reaction Would Be To Kick You In The Knee, Jerk