Rodentiation? Who Ya Gonna Call? 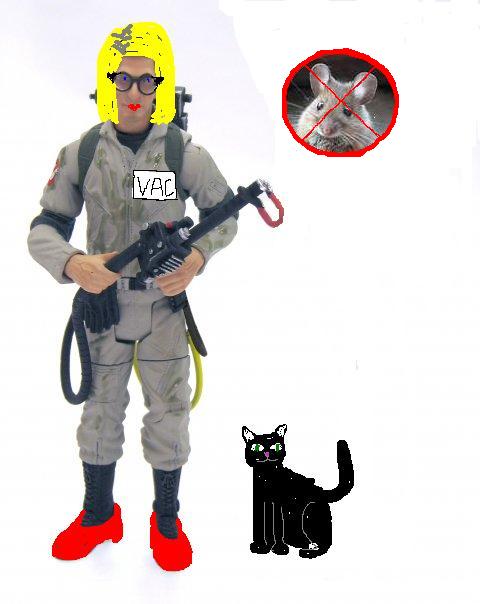 This has been a banner year for mice in our house.  We’re experiencing a level of rodentiation that is the stuff of legends.  Future generations of exterminators will speak of it in hushed tones.

*Helpful Definition:  Rodentiation refers to an extreme infestation of mice.  If the infestation involves rats, the term used is exodusical rodentiation.   This describes the mass exodus of people from the afflicted property, with me knocking old ladies to the ground in an effort to be the first one out.  These are technical terms rarely used except by those of us in the VAC (Vermincular Abatement Community.)

I have a problem reconciling the loveable cartoon image of mice (think Jerry of Tom & Jerry fame or Mighty Mouse) with reality.  Wild mice are dark brown and dirty gray, not sparkling white like lab mice.   I left the “awww, cute” reaction behind long ago.  There’s nothing cuddly about them.

My kitchen counter has become a major mouse roadway, as evidenced by their tiny, black, cigar-shaped calling cards.  They’re getting Stimulus money for infrastructure improvement, like the Bridge to Pantry project.

I know the vast majority of city folk are saying “eeew” right about now, and are mentally hopping up on chairs in their slippers and housecoats.  I’ve become somewhat callused about it.  Mice are a fact of life in the country.  When it’s cold outside, they want to be inside.  It’s nice and warm; there are plenty of off-season decorations and important documents to make nests of, and unless I construct a hermetically sealed chamber for a pantry,  there’s plenty of food to munch on.

We caught two of the bewhiskered vermin just last night.  And when I say “we”, I mean Beeby, our cat, and me.  We’re the resident exterminators.

Beeby comes by her job title courtesy of countless years of evolution.  She and her feline sisterhood have honed their skills until they are unmatched in the animal kingdom as crafty and often cruel huntresses.

As for me, I didn’t sign up for the job, I stumbled into it.  There weren’t any other applicants.

My hubby is way too macho to jump up on a chair and shriek “eeew” when we see a mouse.  He has a live and let live attitude that I really admire, except that it leaves me in the role of Bwana, the great hunter.  Our two daughters are surprisingly squeamish about mice, given that they grew up in the country.  It seems the expression necessity is the mother of invention means the mother has to deal with all the necessity.

So it’s up to Beeby and me to take care of (rodent) business.  I’d say we’re about evenly matched in number of kills.

Her hunting and trapping skills are far superior to mine.  But she loses points for ambivalence towards our quarry.   Sometimes she hesitates to administer the coup de grace.  Beeby can’t make up her mind whether the mouse is supposed to be a toy, a present, or lunch.

I’ve seen Beeby catch one, carry it around gently in her mouth, then release it so she can chase it all over again.  Talk about playing with your food!

Last month, I found no less than 3 mice under the Christmas tree.  Or at least one carcass that clearly had been a mouse, and two little bits that look like kidney beans.   It seems there are certain organs that cats don’t like.  This illustrates two, important facts:

1)  Cats really are finicky eaters, as shown in that commercial with the obnoxious, fat, white cat haughtily deigning to eat out of a champagne glass.

2)  Our cat understands the true meaning of Christmas.  I hope she wasn’t upset that I opened her gifts early.

I don’t want to become blasé about taking any life, no matter how small.  So I bait little plastic tunnels with peanut butter and trap the mice live.   I used to take them outside and let them go, until my helpful hubby pointed out that there must be a secret entry into the house that the rodent underground knew all about.  I was likely to be catching the same mouse over and over again.

Now when I catch one, I set it out on the deck for a couple of days, still in the trap.  The cold weather does the killing, not me.  A fine distinction, I know, but it leaves me my illusions that I am not a cold-hearted killer.

Come spring our problem will be over.  In the meantime, I’ve been thinking I could do some research on the relative merits of various peanut butters as bait.  I could determine whether mice prefer chunky or creamy, natural vs. processed, and if choosy meeces really choose Jiff.

I’m hoping to get some Stimulus money for this important research project.

13 Responses to Rodentiation? Who Ya Gonna Call?