My Dad Has No Rhythm, Yet Is Still The Master Of The Dance

This post was my Father’s Day gift to my Dad several years ago.  It had the honor of being Freshly Pressed and remains one of my (and my readers) favorites. 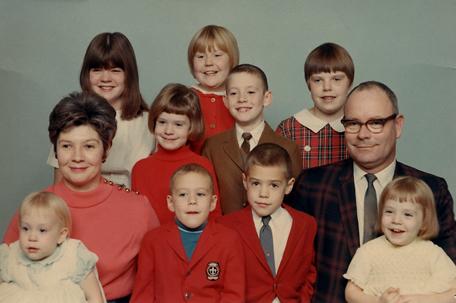 My Dad is the one in the snappy, plaid jacket. I’m the blonde butterball in the back.

My Dad sired 9 children. He then topped that accomplishment by staying around, with our Mom, to raise every one of us. For that reason alone, he deserves to be Father of The Year.

Not convinced? Here are a few things you should know about him.

can clear a room quicker than you can say National Geographic. Not because of poor hygiene or a less-than-winning personality, but because of his TV viewing habits.

All us kids would be piled into our tiny sunroom watching The Monkees or Get Smart on TV. Dad would come in, squat next to the set and start flipping the dial. (This was in the dark days before remotes.) He would come upon a fascinating National Geographic special on plate tectonics and there he would stay. We all groaned, rolled our eyes, exclaimed “Da-a-ad!” and left the room. If we were old enough to do so, we flounced out.

As he squatted next to the set, chewing his nails and staring raptly at the educational program du jour, we would hear his voice faintly, fading as we scattered through our big, old house “Hey, don’t you want to watch this? This is really interesting!”

should have joined the Navy. He bought his first boat when we were young kids. This started a life-long love affair second only to the one he shares with my Mom. I loved the family trips, especially to Mackinac Island each summer.

Each new boat was bigger than the last, and all the early ones were wood. When I think of how much of my life was spent in the boat shed, stripping varnish off metal trim and sticking Coopernal-ed toothpicks into screw holes, all I can say is… Dad, I forgive you.

is one of the smartest people I know. Too smart. He was always ready to help with math homework, but his explanation would sail right over your head. After just a few minutes, your eyes would glaze over. We’d say, “Thanks, Dad, I get it now.” and he would walk away, mission accomplished. He never suspected we would call a friend for help as soon as he left the room.

He taught celestial navigation for The Power Squadron for years, a skill I greatly admire even though the topic makes me glaze over worse than math.

has no rhythm that I’ve noticed, but is the Master of the Dance. He is best known for The Mosquito Ballet.

On sultry summer nights when we were very little, the windows and the balcony door in our bedroom would be opened to catch any stray breezes. Somehow the mosquitoes always got in to plague us. Dad to the rescue. Wearing a sappy expression and brandishing a fly swatter, he would leap and pirouette about the room, chasing the pesky bugs. We stood in our cribs and beds, flushed and sweating in diapers and t-shirts, shrieking with laughter, the sound floating out into the hot, still nights.

My Dad loves fireworks with the pure joy of a child.

As my brothers got older they bought fireworks, most from the lawless land of Indiana, to set off in the driveway. Dad half-heartedly endorsed Mom’s edict to stop because those things “were just too dangerous”, but you could tell only the strictest discipline kept him from elbowing the boys aside to light the fuses himself.

To this day, almost every 4th of July, Dad and some of the family take the boat down the river to watch the fireworks over the water. That’s the only way to see them.

tells a shaggy dog story with the best of them. There’s a real art to telling the long, involved joke known as the shaggy dog. Dad has great delivery, no doubt. The problem is remembering the whole story. Early on, he developed a system. He wrote down his best material and kept the notes tucked in the front pocket of his shirt.

Our parents used to host cocktail and dinner parties pretty often when we were kids. Dad would duck into a corner, surreptitiously refer to his notes, and then sally forth to slay the crowd with his latest gems.

All his shirts still have pockets, and they still bulge with papers. I know for a fact most of those papers are jokes, now sent by friends via that new, joke-passing technology, email.

is a devout man. He spent years in the seminary before deciding the priesthood was not for him. But his faith and devotion to God have been constants in his life; something he and Mom passed on to their children.

When we were kids, we said family prayers almost every night, kneeling in the living room. As I entered my teens, I must admit that I didn’t have quite the appreciation for this ritual that I have now, in retrospect.

Sometimes, in the middle of our devotions, one of my brothers would let one fly: pass gas, fart, release the Silent-But-Deadly hounds of hell. Of course we all started giggling, then looked guiltily to our parents. They tried to maintain the mood, but more often than not, Dad would lose it.  He’d start laughing.  It was that highly contagious laughter that you couldn’t resist. We all joined in, laughing until we were leaning on the couch, crying. When it was obvious this train was not going to get back on the holy track, he’d waive us weakly out of the room.

Prayers called on account of laughter. I think God understood.

At 88, Dad’s ballet jumps aren’t what they once were.   His health isn’t good, but his mind is sharp and he can still deliver a shaggy dog story with the best of them.  He and Mom are still together in their own home, and he still loves and supports God, his family and his country.   For these reasons and more, I’m sure you’ll agree that the Father of the Year Award should go to – my Dad.

What’s that you say? My Dad sounds great, but you’d like to nominate someone else – maybe your dad? Fair enough.

If you’re blessed to still be able to do so, join me in telling each of our nominees for Father of the Year:

32 Responses to My Dad Has No Rhythm, Yet Is Still The Master Of The Dance