Through The Glass, Darkly 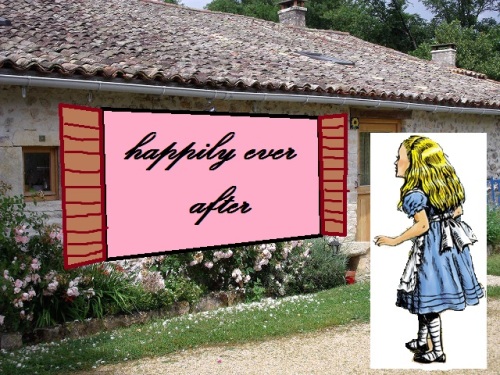 The looking glass was Alice’s doorway to a brand, new world – Wonderland.  But I think a picture window might be a better metaphor for real life.  How we see things depends on whether we are inside looking out, or outside peering in.

An old friend of my husband’s called the other day.  The two met when they were 18 years old and they are still friends, though distance and circumstances dictate that they only talk a couple of times a year.  Bill wasn’t home so Doug and I chatted for a little while.

I don’t really know Doug that well.  The only time we met was when he came to visit when our kids were preteens, about 13 years ago.   He was supposed to stay with us for only a couple of days, but the visit stretched into a week.  Doug seemed like a nice guy, but my most vivid impression was how awkward it is to have a virtual stranger in your home for that long, especially since we had to leave him alone most of the time because of school and work commitments.   I developed a new appreciation for the old saying, “fish and company begin to stink after 3 days.”

I know that Doug is about 60 years old, has no children and is estranged from his family. He tried marriage twice, but it didn’t take. He has some health problems, vaguely alluded to, but I don’t know the particulars.

When he called,  Doug told me he had been dating a woman for a while and he thought things were going well between them.  Then she told him, out of the blue, that she didn’t want to see him anymore. She didn’t give an explanation.  He seemed bewildered and wounded by the sudden turn of events.

He said, “I often think about that time I came to visit, and I wonder if Bill knows how lucky he is.”

People say things like that all the time – it’s such a cliché it’s practically meaningless.  But not for Doug.  It seemed that he had really thought about it.

He went on, “Bill has two great children, a lovely home, and he has you to come home to every night. You have each other. That’s what I thought my life would be like.”

Then Doug said something that blew me away; “Bill got the life I always wanted.”

I was speechless.  How do you respond to something like that?

Each of these responses is true, yet none is true; not by itself.

You’ve got to be careful when you press your nose up against the window of someone else’s life. A wave in the glass can distort your vision, or the light may shine in such a way as to trick your eyes.  What you take to be an inside view might be the outside reflecting off your own hopes, dreams, fears and experiences.

You can never be sure that what you THINK you see is really there.

On the other hand, sometimes you can be concentrating so hard on the dim, small interiors of your everyday world that you miss the big picture.  You develop a “can’t see the forest for the trees” sort of mindset.   It’s good to step out into the bright light now and then and change places with someone who sees things from a different vantage point.

When your life looks rather dull and flat to you, you might gain a fresh, new perspective by looking at it from the other side of the glass.

45 Responses to Through The Glass, Darkly