It started with the death of someone I’d never met.

I am a treasure seeker (aka pack-rat) and love going to auctions.  If I’m at an estate auction, I pass the time constructing a biography of the person’s life.  You can tell a lot about someone from their things.   This practice is usually entertaining, but sometimes the stuff going under the gavel is depressing.  Family pictures are the worst.  It tells a sad story when generations of black and white photos are dumped in a cardboard flat for sale.  Their curling corners say that the last of the family, or perhaps the last one to care about preserving its history, is gone.

About 7 years ago I went to an estate auction for someone I did not know.  Neighbors said that the owner was an elderly woman who had taught school for over 50 years and never married.  In less PC days, she would have been called an old maid schoolteacher. I remember that auction because that’s where I bought a box of rocks.

I’ve always liked rocks. Whether rough, craggy specimens that break open to reveal the elegant shine of quartz, a bit of leaf preserved forever as fossil or an amalgam fused together and worn smooth by time and water, the look and the feel of them appeals to me.

Much as I like rocks, however, I’m not in the habit of spending my hard earned money to buy them, even if they’re only going for $1. That’s what I paid for the rocks at this auction. I bought them because they told a story about a life, and it was a story I wanted to preserve. 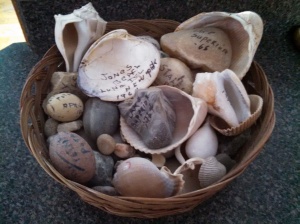 The lady was a traveler who picked up rocks and seashells as souvenirs of the places she went.  She marked each with the date and place gathered, like a Bedrock travel journal.

The oldest specimen is a seashell simply marked “Florida, 1940.” Most of her souvenirs were from Long Island, with an almost equal number from Lake Superior. In the life story I created for her, she had a brother in New York and a sister in Michigan’s Upper Peninsula and she visited them on alternate summer vacations.  She also went to Florida a couple of times. Two, small rocks are marked “petrified potato, backyard.”  I’ve never heard of petrified potatoes but it’s possible.  They do look like potatoes.  Besides, she wouldn’t lie to me.

One small, very ordinary rock is marked “Wales”.  I built a whole, Katharine Hepburn in the movie Summertime fantasy about this one.    She scrimped, saved and planned for years to take this trip, and it was the highlight of her life.  She found love and romance in Europe, but circumstances kept her and her lover apart.  He stayed in Wales, and she went home – sadder, wiser, and with memories to last a lifetime.

I bought the box because nobody else wanted it, and I didn’t want her mementos tossed aside as if they meant nothing.  It was a memory adoption.

I also adopted her practice, and have chronicled my own sporadic trips in the same way ever since. There’s sea glass from my last trip to my parent’s Florida condo before they sold it, the rock plucked from the spray of the Irish Sea in 2009, and my own Brighton Beach memoir from 2 years ago. When I touch that smooth, black stone I can practically feel the sun beating down and smell the salty tang of the strong wind that was whipping off the English Channel that day.

The most recent piece in my collection is a seashell from the beach at San Francisco Bay when I visited my girls there a couple of months ago.  I augment my collection with other bits of stony memorabilia like rocks my then-young kids painted into lady bugs and Pokeballs, and pieces of purple quartz my mother-in-law used to keep by her sink.

These mementos will mean nothing to my kids when I’m gone, and that’s OK. “Stuff” is not the most important thing.  Still, when the time comes for all my treasures to go on the auction block, I hope there will be a kindred romantic soul there to see my stuff through indulgent eyes.  Someone who will be willing to invest a dollar in a box of memories.

91 Responses to Rocks Of Ages