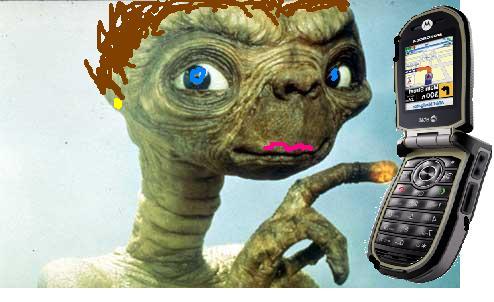 ET rudely texting a friend while Drew Barrymore is talking to him.

We are witnessing the end of an era.  Ever since Alexander Graham Bell used his new-fangled invention to say “elementary” to his assistant, Watson, the phone call has been the communication gold standard.  Not any more.  People under 25 would rather text.

My daughter, Gwen, hasn’t voluntarily called home since she left for college.  If we’re lucky, we get the occasional text.   I keep explaining that the expensive gizmo attached to her hand is a telephone capable of making and receiving phone calls, but I’m not getting through.

I don’t like texting.  For one thing, it’s a lot of work.

People my age struggle with the tiny keyboard.  We squint at it through our drug-store cheater glasses, tongues sticking out as we hit the wrong keys and try to figure out how to punctuate.  Mrs. Harrison taught me to use the shift key in typing class almost 40 years ago, and it’s worked just fine ever since.  How come you don’t use the shift key for punctuation anymore?  How am I supposed to unlearn the habits of 40 years and get up to speed on this thing?

With a phone call, you get to hear the other person’s voice.  You can tell a lot by tone and inflection.  LOLs and ROFLMAOs don’t provide quite the same nuance. You can also get an idea of where they’re calling from, a real plus for the inquiring parent.

I don’t want to text my kids in case they’re driving.  Liz and Gwen both say they would never text while driving.  How stupid do I look?  Gwen doesn’t actually have a car at school, but she could be walking when my text comes through.  Looking down at her phone instead of watching where she’s going, she could very well run into a plate glass window or tumble down an open manhole.  That’s only funny in a Roadrunner cartoon.

Nothing about texting drives me crazier, though, than the texter’s apparent conviction that “anytime, anywhere” is a reasonable mantra.

How many times have you been having a conversation with a kid who keeps glancing at their lap?  The slight twitching of the arms and their fake, interested expression, and you know they are gone.  Their thumbs are typing away under the table.   They’re still communicating with you, though – loud and clear.  They’re telling you that their electronic conversation is a lot more interesting than your “yadda, yadda, blah, blah”.

Can we say, rude?

Then there’s the physical toll all this is taking.  Like I keep telling Gwen, in another 50 years today’s kids are all going to have the carpel tunnel so bad, they won’t be able to function.

We’re going to end up with an entire generation of people who can’t work because they have crippled their thumbs.  This will put a tremendous burden on society.  Everyone will be on Social Security disability at once, and the system will go bankrupt.  The United States of America will no longer be a world leader.  After all, opposable thumbs are what set us apart from the rest of the animals, and allowed us to stand upright, and use tools like a stick to get ants out of a formicary (I saw a National Geo special about monkeys doing that – really interesting), and evolve into people who invented cars and the Sham-wow.

China will take over our country because Chinese characters don’t lend themselves to texting, so their thumbs will be safe.  We will fall just like Rome to the Vandals (or was it the Visigoths?) because there will be nobody with thumbs to do any work or operate weapons.

I can only thank God that I won’t have to pay to support all these selfish, texting teenagers turned thumb-less, middle-aged, lay-abouts because in 50 years, I will be dead.  Or at least so senile that all I’ll care about is finger painting with my own feces.  In any event, whether dead or senile, I won’t be very aware of my surroundings, so let me take the opportunity now to say, in advance, that I TOLD YOU SO!

Anyway, I just can’t figure out why Gwen doesn’t call me.