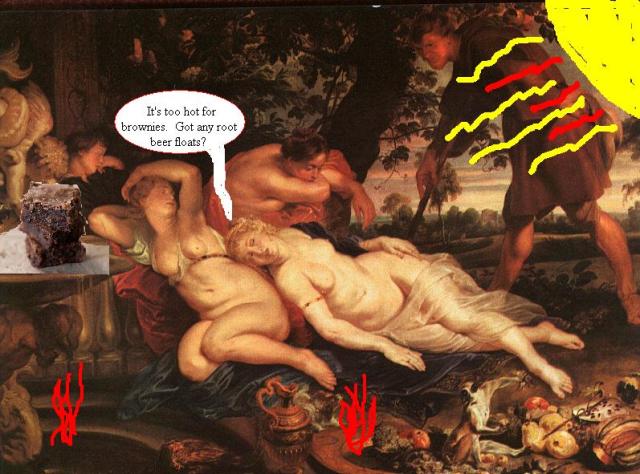 I have discovered an appetite suppressant that is easy, low-tech, requires no special food and costs nothing.

All you have to do is suffer the burning agonies of hellfire.

Most participants in the family weight loss challenge were in Michigan last weekend to celebrate the high school graduation of my nephew, Andy. Before we gathered for the celebration, however, we gathered for a jam-packed day of preparation. In the middle of one of the worst heat waves to ever hit the Midwest. In a church hall that was not blessed with air conditioning.

The tables were laden to groaning with a sumptuous array of homemade goodies. It was a veritable banquet, fit for a king. Creamy salads, chicken, pork sandwiches and au gratin potatoes fought for table-space with sugary snacks, a yummy cake and the most decadent double chocolate brownies this choco-addict has ever laid eyes upon.

After a day spent cooking in the hall kitchen I was barely tempted by the goodies. In fact, the thought of stuffing food into my sweat-stained, beet-red face made me slightly nauseated. I survived the day by volunteering to refill beverages every 15 minutes. These were kept in the walk-in cooler, a wintry wonderland of chilly delight.

So instead of the weight gain I was dreading, I actually managed to lose ½ a pound over the weekend. I imagine most of my sisters shared my loss, as they shared – more than shared – the workload.

The brownies not only looked divine, they had magical properties. I bumped into them everywhere. Whenever I sat down during the party, a brownie appeared before my nose. When I went to my car, there was a brownie on the dashboard. Brushing my teeth before bed – a brownie in the medicine cabinet.

My brother-in-law Pat had, with a hearty smile, offered to fetch me one early in the day. My “no, thanks” wiped that fake smile off his face PDQ. Coincidence? I think not.

Judy strolled into the party looking fab – obviously she has been holding out on her weight loss progress. Naturally I am happy for her (trying to turn my teeth-gritted grimace into a smile).

Sister-in-law Lisa admitted that her Chicago vacation resulted in a 3-pound weight gain. Too bad, so sad. But as this was reported along with the news that she had managed to re-lose the vaca gain already, I was not encouraged.

Terry stayed the same, but that’s pretty good considering her hectic social schedule for the week. Mary Kay reported she lost 3 pounds this week, as did I. Or at least I think I did. Weigh in day has been changed to Wednesday and I can’t keep straight which day I weighed what. I guess I should keep a log.

Nobody else reported in this week. It should be obvious by now that my family is not much for following the rules.

In fact, everybody is so casual about the whole thing, I think I should make sure the cash and valuable prizes are collected now and kept under lock and key by a disinterested third party – perhaps that accounting firm that does the Academy Awards? Otherwise, come the end (which date has yet to be determined), all the booty will have disappeared in a haze of vague, half-promises and I will have suffered the Summer of the Diet Damned for nothing more than a hot, healthy body.