Invasion of the iPod Snatchers 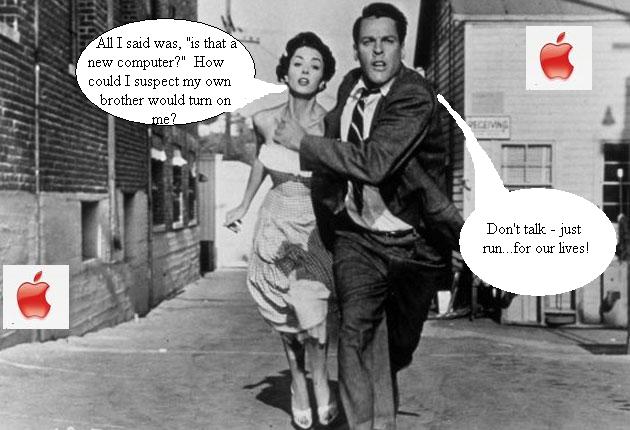 Nowhere to run to...nowhere to hide.

My husband has become one of Them.

They’re taking over.  I keep trying to tell people, but they won’t listen.

Oh sure, it seemed innocent enough at first.  Who didn’t want to listen to their own music play list?  Soon, everybody had an iPod.  Then came the iPhones, then the iPads.  They infiltrated our lives so slowly that nobody noticed they were taking over.

Those who have already been transformed are the biggest threat.

The iPod People are virtually indistinguishable from normal people, except for their total lack of emotion about anything but apps, and future upgrades.  They wear a perpetually glazed-over look, until the subject swings round to their latest i-gizmo.  That’s when they come to life, eyes firing with the religious fervor of a tent-revival preacher.

Ever since my 2-year contract with Verizon was up, they’ve been after me in dead earnest; the phone calls, the emails, the relentless barrage of ads.  It’s not as if I’m walking around with a Seinfeld brick of a cell phone.  Mine has a keyboard and a decent camera.  But it isn’t “smart”.

When one of the iPod People catches sight of my non-i, non-smart phone, it is like waving a red cape before a bull.

They almost got me last week at a party.  My own brother pinned me down as he demonstrated every mother-loving feature of his new iPad2.  Foam flecked the corners of his mouth.   I created a diversion by asking to see the internet features, and was able to slip away when he went to ask the hostess for her Wi-fi password.   I barely escaped with my life 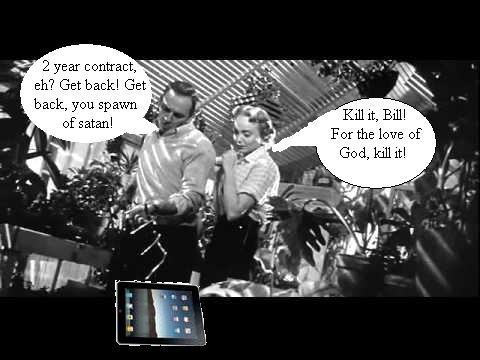 There are just a few - oh, so few - of us left to fight the good fight.

They got my husband, Bill, 3 months ago.   He doesn’t look any different, but a wife knows.  He is an empty shell of the man he used to be.  His body still sits on the couch in our living room, but his spirit is fully taken over by the pursuit and mastery of new iPhone apps.

I’m afraid to go down the basement – afraid my iPad is growing down there, just waiting for me.  I’ll hold out as long as I can, but I’m getting tired.  So tired.

What’s that you say?  It can’t happen to you?  Oh, you naïve fool!  Don’t you know? They’re here already.

26 Responses to Invasion of the iPod Snatchers