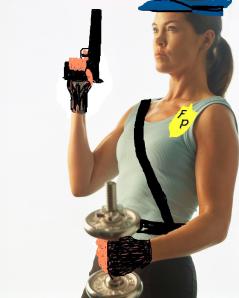 You have the right to remain buff.

I had one of the Fitness Police’s 10 Most Wanted in my sights, and I let her slip away.

I had just parked in the YMCA parking lot when another car pulled alongside.  The driver and I got out at the same time.  As I turned around, our eyes met.  She was smoking.   A cigarette.  I was 6 feet away – tops!  That close, there was no mistaking.

The scofflaw continued to puff away up to the very portals of the exercise sanctuary.   She didn’t stub out the butt until she had her hand on the door handle!

I don’t know how she avoided the surveillance of the Fitness Police.  She entered the very belly of the beast.  It was as if she was thumbing her nose at them all.

The Y is Police headquarters.  They rule there with an iron hand in a black leather, padded palm, wrist-stabilizing exercise glove.  They strut through the Fitness & Health Center, slapping down civilians suspected of crimes against buffness:  obesity, slowness, or wearing high-water sweat pants with black socks.  But the worst infraction has got to be smoking.  You can tell they’re on the sniff for the telltale sign.

Technically, I should be a member of the Fitness Police.   I work out a good 3-5 times per week.   By most standards I’ve earned the half-smile, head-nod acknowledgement the other regulars share.   But they haven’t asked me to join the squad.   I don’t know the secret handshake.  It’s probably because I don’t fit the stereotype.

For one thing, I don’t wear the uniform.  Instead of spandex and sports-bras, muscle shirts and shorts, I’m usually garbed in one of a rotating line-up of sweatpants and baggy t-shirts.  My sports-bra stays beneath its t-shirt covering where it belongs, thank you very much.

The other reason I won’t be asked to join the Fitness Police, is because I am not.  Fit, I mean.   I have been called unfit.  Some have said I’m The AntiFit.  That may have something to do with the fact that I cap most trips to the gym with a trip to the Dairy Queen.

Even with a serious ice-cream addiction, I wouldn’t dare slurp a Cappuccino Heath Blizzard (if such a thing exists) anywhere on YMCA grounds.   And I would never, EVER have the nerve to smoke there. 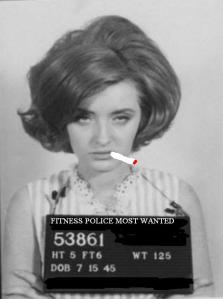 The eyes of a stone cold smoker

I suppose that smoking tobacco products is still sort of legal in some situations.  But that is only in a hermetically sealed chamber, within your home, if you live alone and have no pets, don’t expect anyone to come over in the next 72 hours, and your house is situated at least 2 miles away from any other people or small, woodland creatures.

As a Fitness Police wanna-be, I probably should have made a citizens arrest.  Or at least I should have thrown her a dirty look while coughing and waving theatrically in front of my face.

I listened to that little voice, and I let her go.  Some might say that makes me an accessory after the fact.   That’s something I will have to live with.