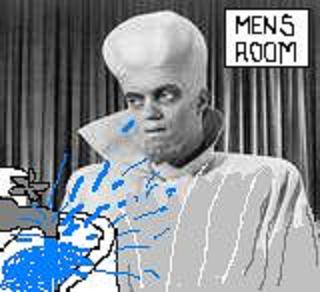 I stopped at a public rest area last weekend.  A sign on the wall read: “To serve you better, this washroom is fully automated”.

This reminded me of a classic Twilight Zone episode, in which giant aliens come to earth to help the human race. Or so they say.  World leaders are relieved when a cryptographer translates the title of one of their books, and it seems to confirm their benevolent intent.  The book title is: To Serve Man.

Fast-forward several months.  People are lining up at a way-station to board transport ships for the aliens’ planet.  The cryptographer, who has been working all this time to translate the rest of the book, rushes in.  “Don’t get on the spaceships!” he cries.  As the aliens wrestle him to the ground he gasps  “To Serve Man….is a cookbook!”

I was a bit skeptical as I entered the washroom.

The adventure began with the automatic toilet.  This is a precision instrument.  The slightest shift in body mass sets off the flush feature, resulting in a delightfully cooling splash of public-toilet water on the nether regions.  You are guaranteed no less than 4 flushes while doing your business.  When you’re finished and actually stand up…nothing.

I next approached the automated sink, which looked like a horse trough.   I stuck my hands under a spigot… nothing.  I waved up, down and sideways.  Still no water.  Another visitor suggested the sensor can’t “see” you if you’re wearing white.  Or black.  Or if the moon is in the seventh house and Marilyn McCoo aligns with Mars.   I had immediate results at the next trough, though.  It shot out a geyser from three feet away that drenched my entire front.

The automated soap dispenser was empty.  But I could tell it worked just fine because of the impressive soap stalactite running down the wall to the floor.

Finally, I arrived at the hot-air hand dryers. These have little signs explaining how they’re good for the environment, and “eliminate the hazards of disease transmitted by paper towel waste”.  Riiiiight.  I know the CDC ranks paper towel disease right up there with smallpox as a threat to world health.

I want to save the planet as much as the next guy, but I miss paper towels.  For on thing, you could use them to open the door, protecting yourself from contamination from the last visitor who may have forgotten to wash.  Paper towels also do one thing that hot-air dryers don’t – get your hands dry.

This restroom had the new accelerator hand dryers.   These STILL don’t dry your hands, but now they don’t do it in only 10 seconds.  The force of the air pushes your skin around so you look like an astronaut hitting mach 2. Which is only fitting because they are so loud they break the sound barrier.

As I opened the washroom door with my elbow, I had to acknowledge the one benefit the modern facility has over its old fashioned predecessor.

Now it’s easy to spot the slobs who don’t wash up.

They’re the only ones walking out of the restroom with dry hands.

19 Responses to To Serve Man