I Will Always Be Fat 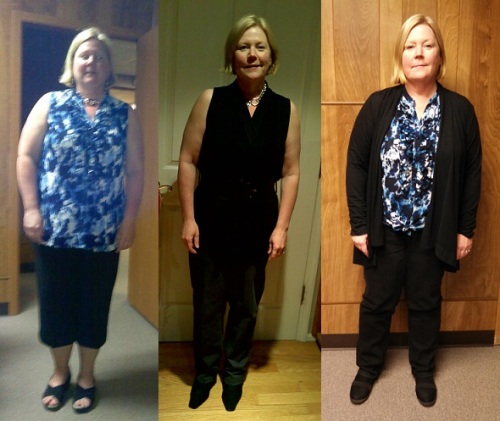 I was born fat.  I have been fat, chubby, overweight or on my way to or from one of those adjectives my entire life.  It’s time to stop kidding myself that I will ever be anything else.

Some are yo-yo dieters, but not me.  I’m a mini-tramp dieter.

I made the cheer-leading squad in 8th grade because, despite my size, I had spirit, yes I did.  None of the factory-made uniforms in the school supply locker fit me.  The neighbor lady made mine from a generic pattern, which meant the style, fabric and colors were noticeably different from the rest of the squad’s.  That was mortifying, but I got over it.   As the biggest I was always on the bottom of the human pyramid and the tiny girls climbed all over me.  Jennae pulled my hair or poked me in the eye every time, accidentally but inevitably.   I learned to live with that, too.  My nemesis, however, my Waterloo, was the mini-tramp.

A mini-trampoline is like a regular one, except it stands only 1 foot off the ground and is about 3 feet in diameter.   The plan for our big cheer finale was for each of us to run at the mini-tramp, jump on, and then bounce up into a straight-back, 90-degree, spread-eagle, toe-toucher in mid-air.  We were supposed to yell our names and finish up by landing lightly and skipping off to the side, all the while smiling and clapping.

I did fine with the smiling, clapping and name yelling; every other part was a disaster.

I’m not athletic.  My run up to the trampoline was hesitant, I climbed on rather than bounded aboard, and I couldn’t do the splits.   I wound up doing a pathetic, hunched-over, leg-lift a mere foot in the air.  One time I landed flat on my face.  The worst part, though, the very worst, was whenever I jumped on the thing it hit the floor with an audible “whump.”  Every performance was gleefully watched by a gym-full of sneering, name-calling adolescent boys and smiling-in-your-face-while-stabbing-you-in-the-back junior high Barbie dolls.  Or so it seemed to the impartial observer, namely; me.

This has been the metaphor for my life-long struggle with weight;  I’m either gearing up for the jump into weight-loss, going down, hitting the bottom or, inevitably, springing right back up to where I started.  I can never stick the landing and run off cheering.

Guess who can’t stop with one graham cracker for an after-school snack?

Check out this groovy family picture circa 1970.  Ignore, if you will, the funny clothes and hair styles, and concentrate on the people.  All 9 of us kids were raised the same way and fed the same food.   Yet there is only one chunkster in the bunch – the blonde butterball in the back.  That would be me.

A couple of years ago I took part in a well-publicized family weight loss challenge.  It was well publicized because I announced it here on the blog thinking that going public would be a powerful motivator.  It was.  I lost a lot of weight and won universal admiration and a bunch of my siblings’ money.  Four years later I’d gained most of the weight back.   I’m sure only good manners kept my sisters from demanding a refund.

We fat people give a lot of excuses, which we know in our hearts are bogus.

“I don’t know why I can’t lose – I never eat anything!”  That’s Selective Eating Amnesia. We eat so unconsciously we don’t realize we’ve consumed the entire contents of a co-worker’s candy dish while standing at her desk.  We finish off the kids’ plates, snack in the car and by the light of the open fridge and it doesn’t register in our brains.  It does register on our thighs.

It’s not that I don’t know how to lose weight; I do.  It’s not that I lack discipline; I’ve done it countless times.  Most of us have.  10, 20, 40, 60 – I once lost close to 80 pounds.   I could use all the weight I’ve lost to form a small army, which would be great to have.  They could follow me around and provide constant reassurance that I’m still fabulous.  The problem is that my army won’t leave me.

You have to be on a starvation diet for the rest of your life.

I’m not about excuses, truly, but it’s clear to me that some of us are hardwired differently about food.  We’re missing the automatic on/off switch when it comes to eating.  Food is an addiction for us, and I think it’s the clingiest monkey you’ll ever try to throw off your back.

I smoked 2 packs of cigarettes a day for over 15 years so I know a little about how tough it is to kick addictions.   I quit for 3 years, then started up again, then quit again and this time it stuck.   I haven’t had a puff in 20 years.  I finally got it through my thick skull that I can never have another cigarette.  Never.  Have.  Even.  One.   Because one is all it takes with an addict.

I’m not minimizing the brutality of addictions to cigarettes, alcohol or drugs, but the thing is that we CAN quit them.  We can quit those things cold and never touch them again.  We can’t quit eating.  People like me have an angel sitting on one shoulder and a demon on the other and they are perpetually locked in mortal combat.  We have to pick sides every single time we open our mouths.

One time I was balking at the high cost of yet another diet – Jenny Craig, Nutrisystem; they all kind of blend together – and my husband said, “If there was a magic pill you could take to lose the weight, wouldn’t you buy it at any price?”  Point taken.  Signed up, lost a ton, gained it back.

There’s a reality show on TV called My Big Fat, Fabulous Life.   It’s about a lovely fat girl who advocates exercise for everyone, along with self-acceptance and no body shaming.   That’s great.   We should all love ourselves and we should get up and move as much as we are able.  I agree.  I’m also positive that girl would give anything to be thin – 100% positive.  If that magic pill did come on the market, even if it cost $1,000,000, she would be right in there with elbows jabbing, trying to get past me and the other Fatty McFatties stampeding to buy it.  She’s a lot younger than I am and probably in much better shape, but I still think I could take her.

I have a lot more years of desperation driving me.

This is the place where you might be expecting some sort of uplifting, self-affirming declaration like, “I’m through with diets.  I’m OK just the way I am, and so are YOU!”   Nope.  I want to be thin.  Thin looks better, thin is healthier, I know that and I want that.   We ALL want that.

Shoots of self-awareness have sprouted anew, curbing my eating and encouraging me to get outside and walk.  I’ve joined a gym.   I might even visit it someday.  I jumped on the diet mini-tramp and I’m losing weight again because I’m not giving up – I never will.

But I am weary to my bones of the endless, Sisyphean process of rolling this body up and down the same hill.  The truth has finally dawned on me; regardless of where I am on my mini-tramp journey, regardless of how my body looks on the outside at any single point in time, I will always be fat.

And that realization makes me sad.

Can I get an amen?

In the interest of full disclosure, I should mention that I wrote most of this last February when the third picture shown above was taken and I was only weeks into my latest attempt to lose weight.  The piece has been sitting in my drafts folder for almost 10 months.  I’ve revisited it since then, tweaking words and rearranging paragraphs, my finger hovering over the “Publish” button a dozen times.   I couldn’t bring myself to hit it.

If I’m being brutally honest with myself, something I usually try to avoid at all costs, I didn’t want to publish this for a couple of reasons.

I know you analytical types want the cold hard facts, so here’s where things stand:

Welcome aboard my mini-tramp.

131 Responses to I Will Always Be Fat