Christmas time is here again.  Tis the season for celebrating cherished traditions.  Around this joint, that means dusting off blog posts of Christmases past; posts that are staler than re-gifted fruitcake.  Enjoy.

I wrote the following post soon after I started this blog, and it is still one of my favorites.  I can’t believe it has never been Freshly Pressed, Discovered, or made into a Broadway hit.   If any WordPress Story Wranglers or rich and famous Broadway producers are reading, feel free to reach out. 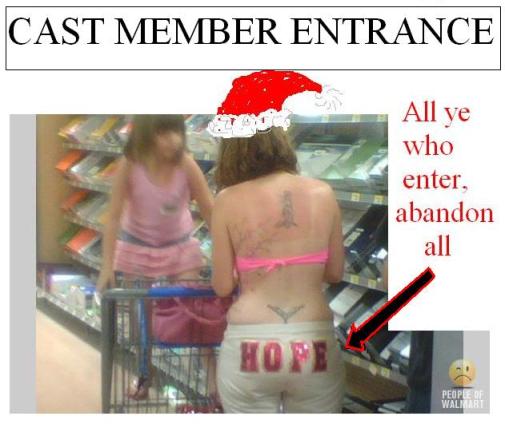 Thanks to People of Wal-Mart for the raw footage.

The entire play takes place in a Super Walmart on a Sunday afternoon during the busy, holiday shopping season.  Here’s the story in a nutshell:

Our heroine is a young ingenue who looks almost exactly like me.    She has been sprinkled with holiday cheer fairy-dust and sent on a quest in the Land of Walmart.  She must find another strand of the same brand of lights she bought last year, to finish the string dangling 1 foot short of the bottom of her half-finished Christmas tree.  Then she must get through the checkout and back to her car before the fairy dust wears off and she turns into a mean, bitchy old crone.

The show opened with Ariana Grande’s spiritual performance of “I’d Rather Be Naughty, So $&%# You, Santa!”  She and her backup dancers wore only sprigs of mistletoe, strategically placed.  As for their dance routine, let’s just say I will never look at a humble candy-cane the same way again.

Next up, a mother softly crooned a simple ballad to the 5 ragged children gathered around her cart.  She was imaginatively costumed in skin-tight black stretch pants and a leopard-print shirt cut low enough to reveal a pair of angels tattooed on the upper slopes of her absolutely ginormous, er, charms.  The song was ” I TOLD You 20 Times!”  and the chorus went like this:

“I TOLD you 20 times you gotta be at least 8 years old before Santa will bring you “Call of Duty: Infinite Warfare.”  I’m going to have your daddy (Rodney, that guy who’s staying with us) WHUP YOUR A** if you ask me again!”

I wasn’t the only one who left the show humming this moving tune.

The children’s choir almost stole the show with their rousing hit, “I Want THAT!”   The lyric was not complicated – only “I Want THAT”, over and over – but the performance elevated the words to art.  The volume of their childish cries built to a mighty crescendo.  The number ended with the whole choir falling to the floor in the middle of the aisles, kicking its collective heels.  Unforgettable.

The Greeters Gospel Choir’s  a-Capella rendition of “Go Tell It On The Mountain (The Holidays Are Here)” had everyone clapping along.   The reworked lyrics explained in an uplifting, catchy way how if the store employees said “Merry Christmas,” it would be the same as forcing shoppers to turn Christian and submit to full-immersion baptism.  Entertaining and really thought provoking.

I took a couple of dance classes as a kid, so I’m familiar with steps like the flap-ball-change.  But I’ve never seen the moves the Walmart Shoppers Dance Troupe perfected for this extravaganza, a routine they call the Oblivious Shuffle.

Each shopper/dancer leaned on his or her cart and pushed it slowly, oh so slowly, back and forth across the stage.  Their shuffling steps kept one shoe (or house slipper, as the case may be) on the floor at all times.  The shuffling feet made a “shush, shush” sound that underscored the “squeak, squeak” of their unoiled cart wheels.  The occasional crash of colliding carts played like cymbals in the composition.

About half of the dancers had cell phones pressed to their ears.  One at a time, each burst loudly into song with lyrics like “…so that witch my baby-daddy is with now said they couldn’t take the kids Christmas Eve because they had to pick up her kids from her ex-baby-daddy’s, but we gotta go to my new baby-daddy’s grandma’s, so I told her if you think I’m going to take them on HIS day, you can just tell that &%$#…” Their solos were incomprehensible, one-sided conversations when taken by themselves.  Together, they wove a timeless Christmas story.

Meanwhile, the young ingenue wove her cart skillfully in and out of the shuffling throng, trying to get to the checkout.   Every checker shut down just as she got to their register, crying “price check on 10″ and “manager override on 5” in a surprisingly harmonious medley.  The audience held their breath when a determined shopper with 2 carts piled high cut in front of our heroine in the “15 items or less” lane, but there was no crash – it was all part of the show.

I don’t want to give away the ending in case you decide to see the show.  Suffice it to say that when our ingenue finally left the store and trudged through the slushy parking lot trying to find her car, she looked a lot like the apple-wielding hag in Snow White.

R-A-M-B-L-I-N-G-S, Ram...Blin!
View all posts by pegoleg →
This entry was posted in General Ramblings and tagged Christmas, Discover wherefore art thou?, how to survive Christmas shopping without shoving an ice pick into someone's eye, humor, life, musings, shopping, the best musical never to be on Broadway, Walmart. Bookmark the permalink.

37 Responses to The Walmart Christmas Extravaganza