The good thing about nature is how it’s so natural. Except when it’s unnatural, or even supernatural.

It’s colder than bedamned here in Illinois but, and here’s the great part, we haven’t had any snow or ice to speak of. That makes all the difference, especially for someone like me who likes to go for nature hikes.

It’s too dark to go after work, so I try to sneak out on my lunch hour a couple of times per week. My usual place is the towpath down on the canal, but that’s closed due to flooding. This screwy winter weather keeps bringing rain instead of snow. The state parks are too far away for an afternoon quickie, so that leaves me with the park in town. It’s wide, open tundra with a path that runs 8/10th of a mile around a pond.

I walked there yesterday and it was BRISK with a capital BRRRRRRR, especially around the back half of the pond. I resolved that next time I went I would double bundle-up. Next time turned out to be today. The place was deserted, sunny and cold again and I was still fiddling with my gloves 20 yards down the path, fixing my scarf so it would cover most of my face without knocking my earphones off, when I caught movement out of the corner of my eye. I turned and looked, then stopped dead.

There was a coyote at the edge of the pond.

It was about 30-40 feet away, big and gray. Did I mention that it was big? The beast was turned away from me, standing stock-still and looking intently at something in the pond. Then it lifted its bushy tail and I noticed its back was kind of humped.   The coyote was, er, having a private moment.  Taking a dump. Crapping. Call of the wild answers nature’s call.

These are the thoughts that ran through my brain as I stood frozen on the path, too scared to move lest I attract his attention. I was also thinking; why, oh why, had I left my pepper spray in the car? I never go without it in isolated areas, but this park is in town, surrounded by houses, albeit at a bit of a distance. Fat lot of good they would do me now. Fang would already have my throat ripped out before any of the neighbors noticed anything amiss.

I looked around, moving just my eyes, searching in vain for something to use as a weapon. Perhaps I could construct some sort of rudimentary lathe?* There must be a fallen tree branch nearby with which I could arm myself. But this well-manicured city park had nothing as messy as natural debris lying within reach.   It was pristine. Maybe I should make a run for it? Common sense asserted itself: there was no way I was going to outrun the thing, especially since I’m about as fleet of foot as a walrus, and he probably runs like a, well, a coyote. Those National Geo specials about the lion leaping on the wildebeest’s back to deliver the death bite to the back of the neck sprang quickly and sickeningly to mind.  Nature is dangerous, as I’ve mentioned before.

The coyote remained still as a statue and nothing appeared to be happening – just his tail waived. He hadn’t even turned around to look at me yet.  I realized that he wasn’t staring at prey, but was just concentrating intently on finishing his business.  Nothing seemed to be happening in that department. 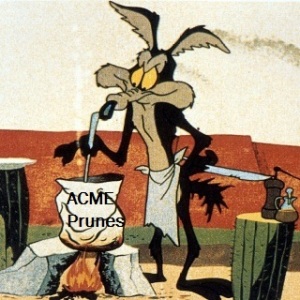 I felt a moment of sympathy for a fellow creature; who hasn’t been there, done that?   Straining is never a good idea – you risk a heart attack – but what are you going to do when your plumbing’s backed up?  It looked like Wile E. Coyote needed to add more fiber to his diet.

As I stood there considering my options and contemplating the universality of constipation, a guy ran up from behind and passed me on the towpath. It seems there was another hardy human in the park. I wanted to scream to the man to be careful, but I didn’t want to rouse Fang’s wrath. Then I noticed that the guy had glanced casually at the coyote and kept on jogging, as if wild animals in the heart of the city were an everyday event. Fang still didn’t move. It was downright unnatural.

It occurred to me then that I might not be in mortal peril.

I unglued my feet from the path and advanced slowly, oh so slowly, toward the beast.

As I got closer I saw that the bottom of its legs had been chopped off and it was mounted on a single pole in its middle. What kind of sicko would do such a thing to an animal? Was it a macabre joke? Some satanic ritual? It wasn’t until I was 10 feet away that I discovered it was a very realistic plastic decoy, with what looked like a real coyote’s tail tacked on the end.

I looked around for someone from Candid Camera to jump out at me, but nothing happened so I shrugged and started walking again, waiting for my heart rate to return to normal. I’d already had a helluva cardio workout and I hadn’t gone 30 yards!  Farther down the path I saw yet another coyote statue down by the pond and I decided to take a picture of this one, to prove that I wasn’t crazy.  I picked my way carefully through the grass because it was a goose-poop minefield, and that’s when the light bulb went off over my head.

The coyote decoys were there to scare off geese.

Geese are flying, honking vermin. They have few natural predators and their chief one has been hog-tied by modern regulation.   If our ancestors saw a goose they would run to get their blunderbuss. Bam! Goose dinner. Now they can only be hunted on alternate Tuesdays during October if the temperature is between 48 and 49 degrees. As a consequence, the goose population has exploded and these loud, aggressive poop machines have become the curse of parks and subdivision ponds all over the US. At least Florida residents can count on alligators taking out a couple each year, but those of us in the Midwest aren’t so lucky.

A city worker was planting snow reflectors on the edge of the path about half way around the lake and I stopped to ask him about the coyotes. He said he’d come to the park a couple of days before and the place was overrun with geese.  He had put out the fake coyotes just that morning. Their whole bodies were supposed to pivot on the pole in the breeze, which along with the waving tail gave enough movement to fool the geese. Sure fooled me.

I commented on how realistic they were. I said the manufacturer must have a sense of humor to make one model that even looked like it was “going” – you couldn’t get more natural than that. The guy looked puzzled and said they were crouching, like a coyote does when it’s ready to spring at its prey. 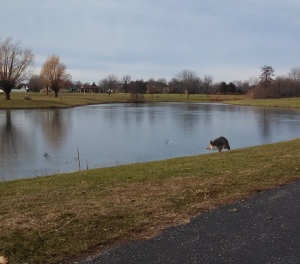 Crouching? Crapping? You tell me.

Oh. I guess that’s one way to look at it.

I counted 10 of them around the perimeter of the pond, and not a single goose. Most of the decoys did look like they were crouching in the grass, but I still maintain that the first one appeared to be taking a dump. In any event, the important thing is that they scare off the geese, and I’m sure they’ll do a great job.

After all, they scared the crap out of me. 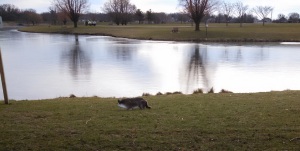