Are You A Wuss? 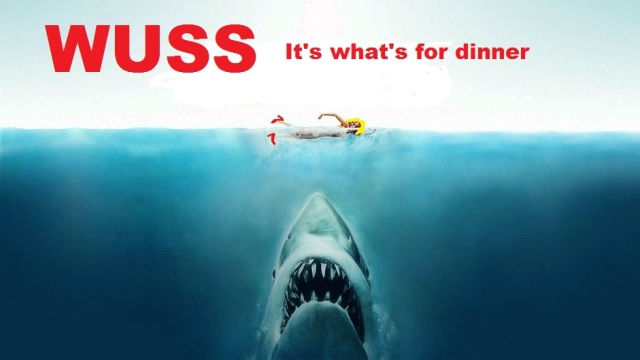 I’d like to think I’m the kind of person who would rush into a burning building to save somebody’s cat.  But when it comes to scary or gory stuff?   I’m a total wuss.

My friend Susie at Susie Lindau’s Wild Ride went to see the movie Jaws  projected onto a big screen behind a swimming pool for ultimate impact.  She said it was fun, but I’m not buying it.  I don’t care if the special effects look like a couple of 4-year-olds playing with toys in the tub by today’s standards.  I saw that movie when it first came out, and it was super-scary.  Hearing that theme song when I’m near any body of water bigger than a wading pool is enough to make me pee my pants.

Lots of people love horror films and graphic games, my own kid included.  Not me.  Once I’ve been introduced to a gruesome menace (be it alien or domestic) it is just a hop, skip and a jump for my vivid imagination to put said menace on the road leading straight to my house.

I’m a wuss; how about you?  Now there’s any easy way to tell.

I.  You hear a strange noise downstairs late at night. You:

II.  You find mouse-droppings in the kitchen. You:

III.  A friend invites you to see the sequel to Mutant Axe-Murderer Zombie Apocalypse of Gore. You:

IV.  There’s no better way to unwind at the end of a long day than by playing video-games. Your go-to favorite is:

2. LEGOs, The Lord Of The Rings

V.  You overcome your fear of the original, black and white Night of The Living Dead movie, which gave you nightmares as a kid, and go see a revival showing at the Bijou. As a result, you:

Score: Add up each answer’s allotted points and check your score against the Wuss-o-Meter* handy classification guide: 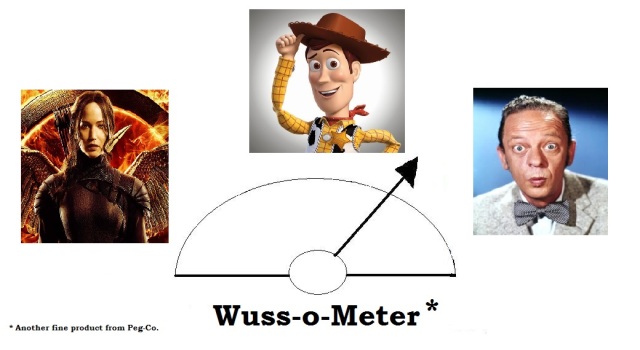 89 Responses to Are You A Wuss?