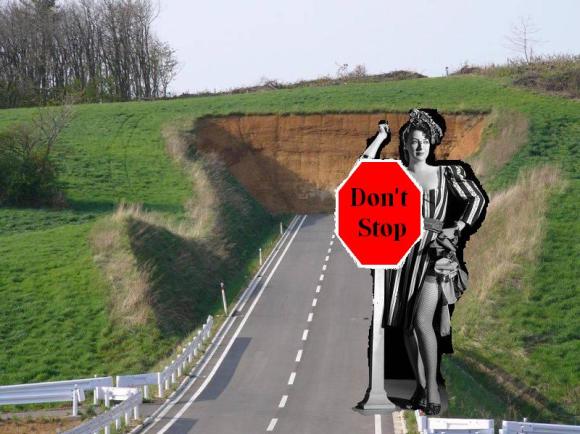 Many women suspect their husbands would be lost without them.  I have proof.

We were visiting my parents and Mom needed something picked up across town.  My husband offered to drive me, chivalry giving him an excuse to show off his latest toy.  Getting my gadget-loving guy a GPS had been a stroke of gift-giving genius on my part.  It was also practical.  Bill would rather spend 40 years wandering in the desert than ask for directions.

He typed the destination address into the GPS’ keypad as we backed out of the driveway. “Calculating route,” said a surprisingly sexy, woman’s voice.

“Turn right on Lincoln,” the sultry voice continued, “and travel east 2.1 miles.”  Bill seemed mesmerized.  He could barely drag his eyes from the screen to watch the road.

“The satellite tracks our location,” he explained, “then Gypsy figures the best route.” He smiled as proudly as if he’d invented the thing.

“Gypsy?” I arched an eyebrow.

“I don’t think Mackinaw goes through,” I said, doubtfully.

The route looked more familiar with each passing mile.  “Mackinaw dead-ends at the highway.” I stated, sure of myself now.  “This will take us miles out of our way.”

“I think Gypsy knows best,” Bill said, his smirk so condescending he might as well have patted me on the head.

“Continue north on Mackinaw for 3.2 miles,” Gypsy purred.  She and Bill acted as if I wasn’t even in the car.

Gypsy’s frequent reminders were the only sounds heard for the next 5 minutes.   I sat slouched in stony silence with my arms folded across my chest.  Then I sat up straight.  I started to smile.  My smile stretched from ear to ear by the time we reached the next stop sign.

Bill didn’t respond.  He was busy contemplating the steep, grass-covered hill that arose straight ahead of the T-intersection at which we were stopped.   He turned right, scowling.

“Recalculating route,” Gypsy said.  She didn’t sound quite so sexy now.  In fact, she sounded annoyed.

He swallowed his pride and asked me for directions after just a few minutes.  I showed restraint and didn’t tell him to get lost.  Instead, I told him where to go.

68 Responses to Lost: One Husband. Substantial Reward For Safe Return