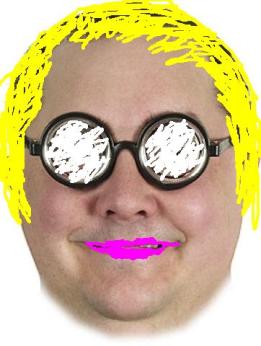 It occurs to me that I might need glasses.

Tonight at the Y I passed some loon on a treadmill who was making faces and flinging her arms around.  It wasn’t until I was well past her that it occurred to me that I might have known her.  By the time I got to my treadmill I realized that instead of averting my eyes from a whack-job doing an interpretive dance, I might have just snubbed my biggest client, who was smiling and waving at me.

On the way out of the place I ran into Dan, the 25-year-old son of some of our friends.   I gave a big smile as I approached him, and called out, “Hey there, how’s it going?”  Only it wasn’t Dan.  As I got closer I could see it was just some random 25-year-old.  From the look on his face, he was not one of those guys whose fantasy is to have an older woman come on to him.  Leastwise not the red-faced specimen in the baggy sweats who was standing before him.

There used to be a public service spot featuring Charlie Brown on TV when I was a kid.  He wore a Sherlock Holmes cap and looked through a magnifying glass while a voice-over announcer dramatically intoned, “Amblyopia: the case of the lazy eye.”  That’s what I had.

All it really meant was that I would close one eye when I was trying to look at something.  I was supposed to do eye-strengthening exercises and wear an eye-patch around the house.  Cool, right?  Wouldn’t you think I would embrace my inner pirate and walk around saying “arrr, matey”?  Nope.  Hated it!   Didn’t wear the patch and didn’t do the exercises.   Hated the glasses and lost pair after pair.

Fast-forward 40 years.  I’m nearsighted.  Because I didn’t follow the doctor’s orders when I was a kid, I now have to “wear” glasses.   And by “wear” I mean, “keep nearby in case putting them on my face is absolutely necessary”.

Between the ages of 5 and 15, “nearby” meant “probably somewhere in the house”.  What some people might refer to as “lost”.

The alert reader may ask “What about between the ages of 15 and 25?”  Those were the years when “needing” glasses meant just that.  I didn’t have any.  I lost so many pairs that my parents finally refused to buy any more.  It wasn’t until I was 25 and driving down a 2-lane country road in the dark in the rain that it occurred to me that I might “need” glasses in a way that meant, “cannot see little details like oncoming cars without them.”  I went to the optometrist the very next day and have been wearing glasses for night driving ever since.

I got a new pair with snazzy, blue plastic frames last year.  I keep them in my car.  I also need glasses to see the TV, so I keep my second-to-last pair, when I was rocking the frameless look, next to my chair in the living room.  Without them, the onscreen TV guide is a big blur at a whopping 5 feet away.

Except for driving and TV, I’ve been doing OK without glasses up to now.  Little incidents like the ones at the Y, however, have been getting more frequent.  The last straw may be my recent sudoku troubles.

I do sudoku puzzles every night before bed.  What can I say – they relax me.  I plop the World’s Most Ginormous Book O Sudokus down on my pillow, prop up on my elbows and commence with the number-fying.  Lately, however, I’ve been having trouble reading the numbers.

It looks like the moment I’ve been avoiding for 47 years has arrived at last.  I may have to break down and get the dreaded bi or even trifocals.  Not only that, I may have to actually wear them.  Damn!

Wait a minute, I just thought of something.  I think I still have the pair BEFORE the pair before the last one.  They’re not as strong as the current prescription, but if I can dig them up, I’ll just keep them on the bedside table.  Then I’ll have all my glasses-needing situations covered, without having to resort to actually “wearing” glasses all the time.

Besides, I always liked those old glasses.  There was something about them – I thought they made me look like a movie star.

57 Responses to Ride My See-Saw