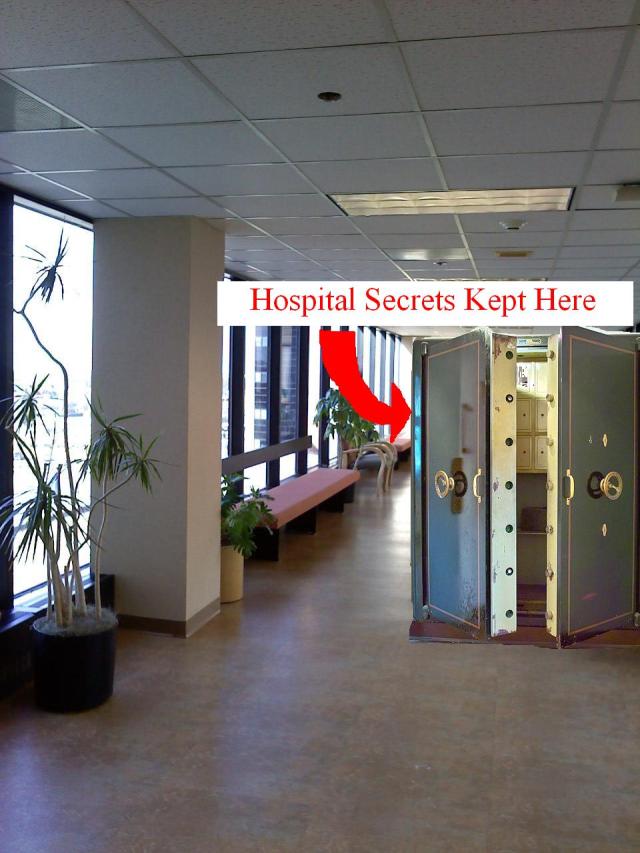 Sometimes you don't get to know.

File under: Truth is stranger than fiction.

Last month I did a serious blog post about keeping my sister Lib company when she was in the hospital for a week. Another sister, Mary Kay, and I noticed a family who was also keeping vigil.  We felt close to them, and wondered what their story was.  The post is called “Intimate Strangers.”

Fast forward to last week.  Lib went to another hospital for a second opinion and a biopsy.   This is a huge hospital, several hours away from the first.  She would normally have been sent to the Neuro ward following the procedure, but they were full up.  She was sent down to the Trauma/Burn Unit Intensive Care for recovery.

Did I mention that this was a huge, sprawling hospital?  The Trauma/Burn unit was tucked away in a wing, down a long corridor, in one little corner of the place.  You had to be buzzed in to even visit.

Mary Kay and I were, once again, keeping vigil.  (Boy, when you think you’ve got it bad, just think of the poor souls in a burn unit.  But that’s a topic for another day.)  We left Lib to rest and were walking down the hallway in the unit, when I noticed a woman up ahead talking to two young men.  As we drew closer, I thought she looked familiar.  I turned to Mary Kay and silently jerked my head to the woman, a puzzled look on my face.

Mary Kay looked.  She recognized her the same moment it occurred to me.  I could practically see the light bulb going off over her head, just like in a cartoon.   It was the older woman from the other hospital!

I couldn’t help it.  Instead of walking politely by, I interrupted her conversation by blurting out “Weren’t you at another hospital last month?”.

As we babbled something about seeing her there, she seemed startled, but then looked at Mary Kay and said “I recognize you!”

2-1/2 hours away, different place, one month later, Trauma/Burn unit instead of Neuro where we belonged – what are the odds?

Unless this woman was a modern-day Job, chances are she was visiting the same person she had been with at the other hospital.  That meant he hadn’t died.  One question answered.

My sister Mary Kay is as polite and unpushy a person as you will ever meet.  She’s probably the only quiet one in our whole big, loud, nosy family.  That’s why I was taken aback when she started pumping this woman for information like she was interrogating a Russian spy.

“We’re here with our sister who just had a biopsy.  That’s who we were with before, too.”  She paused, inviting return confidences.

“And is your husband with you this time?” Mary Kay continued ruthlessly.  I fully expected a syringe of Sodium Pentothal to appear in her hand any second.

“No, he hasn’t been around for 35 years.” The woman replied.

Now we were getting somewhere!  The patient is NOT her husband. Sounds like a divorce situation.

That was all we were going to get.  Despite grilling techniques that would have done Bobby Flay proud, Mary Kay could not crack her.  We turned away with good wishes on both sides, no nearer to knowing the true story.

What does this teach us?

It IS a small world.  Life is full of strange coincidences.  And sometimes, the only story you get is the one you make up.