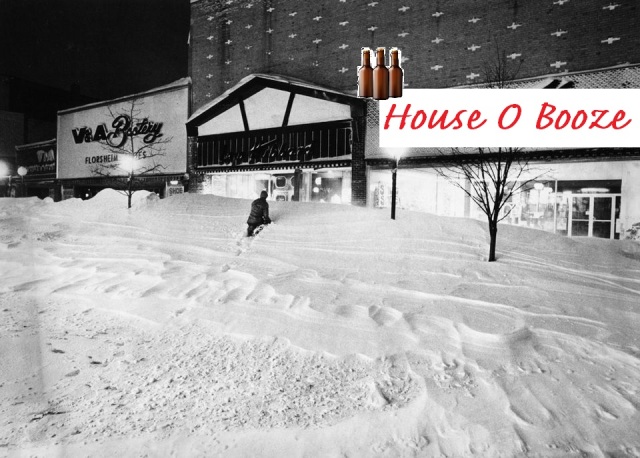 neither rain, nor snow, nor dead of night will stop them

Forty years ago today, I thought the end was near.  I found myself confronted by a pack of snarling, howling, wild animals; a metal mesh gate the only thing separating me from certain disembowelment.   I had armed myself, but doubted the institutional gravy ladle clutched in my trembling hands would be up to the task.

The Great Blizzard of 1978, also known as the White Hurricane, was a historic winter storm that struck the Ohio Valley and Great Lakes regions from Wednesday, January 25 through Friday, January 27, 1978.  According to Wikipedia, up to 40 inches of snow fell. Winds gusting up to 100 miles per hour caused drifts that nearly buried some homes, and wind chill values reached −60 °F across much of Ohio where 51 of the total 70 storm-related deaths occurred.  About 100,000 cars were abandoned on Michigan highways, most of them in the southeast part of the state.

I was a freshman at the time, at a tiny college called Northwood University in Midland, Michigan.  My roommates were from the Caribbean and South America and one girl, Hilda, had never seen snow.   On day one of the storm she dragged me outside for a little stroll.

While I have nothing but admiration for Ernest Shackleton’s intrepid journey to Antarctica, he’s got nothing on Hilda and me.  It took a full hour to go around our small dorm building through waist-high snow.  More than once I cursed our lack of adequate preparation – we had not thought to bring a rum-toting St. Bernard on the expedition.  The dorm was a 50s-era, dull pile of cinderblocks that always smelled faintly of gym shoes and boiled cabbage and I was never so glad in my life to be someplace than when we made it back inside alive.  But the worst was yet to come.

I had a little part-time job at the college working food service for banquets.   I once served Arthur Godfrey a plate of lukewarm chicken, potatoes and green beans!  That should impress the people over 65 who know who he was.

My regular gig was serving breakfast to the Sunrise Optimists Club.  They met in the banquet hall every Tuesday morning at, you guessed it, sunrise.  My parents took it as a promising sign that I, the world’s most notorious over sleeper, would be getting up and at ‘em BEFORE 6am so the Optimists could have fresh coffee, blueberry cake donuts and powdered scrambled eggs that were cooked in sheets, then folded and cut into squares so they looked like yellow versions of your grandpa’s handkerchiefs.  It was a paycheck. I didn’t work in the cafeteria, though – they had regular employees for that.

On this day, forty years ago, the whole college was shut down.  Hell, most of the Midwest was shut down.  That meant that none of the grups (grownups in Star Trek-ese) who were paid to take care of us pampered college students could make it out to campus.  We were on our own.

The students had to be fed, so any and all of us who worked in the kitchens and lived on campus were pressed to help out.  We were like the National Guard of food service, called to action because the regular food service army was off fighting at the front.  Our leader was an older student who had worked there the longest – she was a sophomore.

She set us to work opening 20-gallon cans of green beans and 50-pound boxes of instant potatoes, trying to cobble together enough to feed the gathering throngs.  I was totally out of my element here.  What did I know about cooking?  My expertise lay in brewing coffee and arranging blueberry donuts on trays.

The students were gathering, within sight but just out of reach in the dining hall.  It was separated from the kitchen by one of those metal accordion gates they put across the front of liquor stores in bad neighborhoods.   How appropriate.

It has been a constant through history: when confronted with seemingly insurmountable obstacles, mankind has risen to the challenge with almost super-human effort.  You hear about mothers lifting cars to save their infants trapped beneath.  So it was during the Great Blizzard of 1978.  100,000 cars stranded throughout the state, emergency crews helpless in the face of mountains of snow, yet more than one intrepid student had found his way through the blizzard to seek vital supplies.  Apparently a liquor store was open a mile away.

By day two of the catastrophe, fully half the student body was drunk.

When authority is removed, you find out who you are as a civilization.  Do you rise to the occasion and work as one?  Or does society break down?  Dinnertime at the Northwood cafeteria was like The Lord of The Flies.

As we worked frantically to figure out how to feed the animals at this zoo of higher learning, the inmates grew increasingly restless.  They pressed up against gate, some shaking the flimsy barrier.  They raised their voices, demanding in slurred accents, “Where’s our dinner?”  They had become a drunken, unruly mob.  I was, frankly, terrified.

Our fearless leader stepped up.   She went up to the gate, rapped one guy’s knuckles with her spatula and said, “We’re working on it.  But we’re not opening the gate, and there will be no food at all until you assholes back off, go sit down and act civilized.”

So many kids were smashed, I didn’t know if they would listen or become an even uglier mob.  It was touch and go.  Then the mob turned back into students and shuffled away from the gate.  I don’t remember much about after those tense moments,  but the girl in charge opened up and we got everybody served something to eat.  It seemed to help having a little food in their stomachs to absorb the alcohol.

After dinner I scurried back to my dorm room and didn’t come out for 2 days when the grups were back and order had been restored.  I lived off blueberry donuts purloined from Optimists breakfasts of old.

Forty years later, I look back at The Great Blizzard of 1978 and laugh, but I still carry the scars of that momentous occasion.  The smell of blueberry donuts makes me break out in a cold sweat.

Did you live through the Great Blizzard of 1978?  What is your most vivid memory?

R-A-M-B-L-I-N-G-S, Ram...Blin!
View all posts by pegoleg →
This entry was posted in General Ramblings and tagged Blizzard of 1978, cafeteria, college, humor, life, Lord Of The Flies, musings. Bookmark the permalink.