Epic Bloggah Meet-up Sends Maine Spinning Off Into The Atlantic 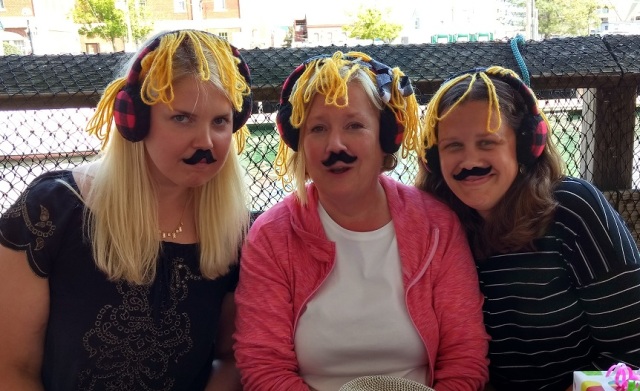 Too much awesome for one photo.

Yeah.  No, really.  This happened.  And it was every bit as magical as you can imagine, times 5 bazillion.

My niece, Kelly, recently moved to Maine.    My daughter, Liz, and I made plans to fly out and visit her and my sister-in-law, Becky, for Labor Day weekend.   It didn’t occur to me until the week before our trip that my bestie blogging buddy, Miss Darla of She’s a Maineiac fame, also lives in Maine.  We were only going to be there a few days, and I had no idea how far apart they lived but, heart thumping, I emailed Miss Darla to see if a meeting would be possible.

It was possible.  It would be done.  And there was much squeeeeeeeeing!

Things got even better from there.  Because Darla revealed that equally awesome blogging buddy Jules, from Go Jules Go, had already contacted her to say she would be travelling to Maine that weekend.  Double squeeeeeeees! all around.   The world’s most epic bloggah (that means “blogger” for those not from Maine) meet-up was on.  This meet-up would be so awesome-sauce that it would cause the entire state of Maine to break clean off the mainland and go spinning into the Atlantic Ocean.*

It’s funny how close you can get with someone in an online community like WordPress.  Y’all are part of the daily fabric of my life, as, I flatter myself, I am part of yours.  Sometimes it seems we get to know one another more intimately than most flesh-and-blood people in “real” life.  The distance and relative anonymity of typing words, as opposed to saying them, face to face, helps us to be true and honest.  That freedom to strip away the social conventions is both the worst thing about the internet and its major strength.

Having the opportunity to attach faces, bodies and voices to people I had loved for years because of their ideas, was more than I had dreamed could happen.

We decided to meet for lunch in Portland and Darla picked a great restaurant right on the wharf.  My family and I got there before they opened and waited out front as a big line formed to get in.  I was nervous.  Then someone walked up and stopped to fiddle with her phone about 20 feet down the sidewalk. “Darla?” I asked.  No response.  I abandoned my place in line and moved in closer.  “Darla?” I asked louder.  I sure hoped it was her because she had barely looked up before I had my arms around her and was squeezing the stuffing out of the woman.  It was her!

I don’t know who was smiling wider – Miss Darla or me.  We kept hugging and grinning like big doofuses, saying “I can’t believe it’s you!” over and over again, right there on the sidewalk in front of God and everybody, including about 300 people waiting in line for this great restaurant which only contained a couple of tables and…yikes!  They had opened the doors while we were slobbering all over one another.  I had to knock down an entire family of South Korean tourists to reclaim our spot in line and snag a couple of tables. 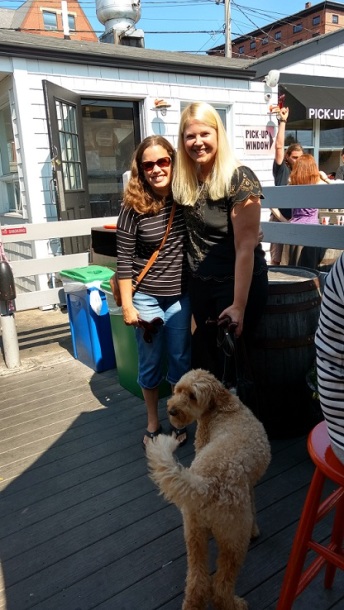 There were people, and dogs, and lobstah.

Just a few minutes later, an adorable dog trotted down the aisle toward us, followed by his wonderful owner.  Jules and Uncle Jesse were in the house!  Darla and I both hopped up and there was more hugging, squeeeeeing! and repeating, “I can’t believe it’s you!” all around.

Lunch was fabulous.  As a resident of Maine, Darla is required by law to promote the state’s three primary resources to all guests: lobstah (that’s “lobster” for non-Maineiacs), blueberries and moose.  We had lobstah rolls along with blueberry beeyah (that’s “beer” for non-Maineiacs), but we didn’t see any mooses.  Must have been scared off by all the tourists packed into the town for the holiday weekend.

It turns out Darla’s birthday was the next day, and Jules brought her a special present: a neon-green fringed t-shirt inspired by Jules’ recent post about the New Jersey fashion scene.  It fit Darla like a glove.  I would show you photos, but I can’t because Darla is in negotiations with MTV for a remake of the popular reality show, “Jersey Shore.”  The spinoff is tentatively titled:  “Maine Shore: The Darlooki and Jim-Woww Story.”

Then Jules surprised us with more gifts – one for each of us.  Darla and I tore into the packages to find personalized lobstah vibrators.   I’m not gonna lie.  It was a bit awkward.   But after our first, stunned silence, everything was good.  I know Jules’ heart is in the right place.

My blogging buddies are just as I pictured them, but more so.  Jules is a statuesque, blonde goddess.   Darla is cute-as-a-button and surprisingly tiny.  And Uncle Jesse’s fur is even more luxurious than photos can do justice.

Some thanks are in order:

Thanks to Darla’s husband Jim, and their two kids for driving her to Portland.   Although they weren’t able to take the time to actually stop and meet us, Jim was kind enough to slow the car down enough so that Darla didn’t break any major bones as she tumbled out into the roadway in front of the wharf.  Catching sight of the backs of their heads in the car as they sped off as fast as possible, given the traffic, made me feel we made a real connection.

Thanks to Uncle Jesse for coming along.  Although he didn’t really have much of a choice since Jules was driving.  And he is, you know, a dog. 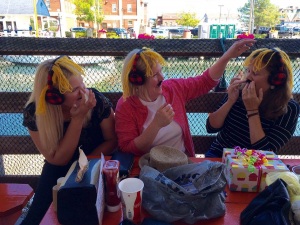 Behind the scenes in Wardrobe.

Thanks to my wonderful family for putting up with this nonsense.  Becky, Liz, Kelly and her honey, Nick, took time from a very packed, short weekend to drive up the coast and stayed to have lunch with us.  I know they were thrilled to be in the company of three such distinguished bloggers even though they sat at a separate table and hid behind their menus.  When we donned our matching mustaches and plaid earmuffs embellished with yellow yarn hair, and our fellow diners stared in horror,  I’m sure my family loudly said things like, “I have no idea who those 3 women are” and “shouldn’t someone call the authorities??” merely to hide how proud and deeply moved they were by the event.

Finally, thanks to Darla and Jules for making this happen and for being so, so fabulous.  I’m still smiling like a big doofus, and probably will be until the next annual Bloggah Lobstah meet-up.  Can’t wait for 2017!

*Maine didn’t really split off the mainland and go spinning into the Atlantic ocean.  That type of “hyperbole” is something we writers do to make a point.   If Maine really had broken off from the rest of the country you probably would have heard about it on the news.