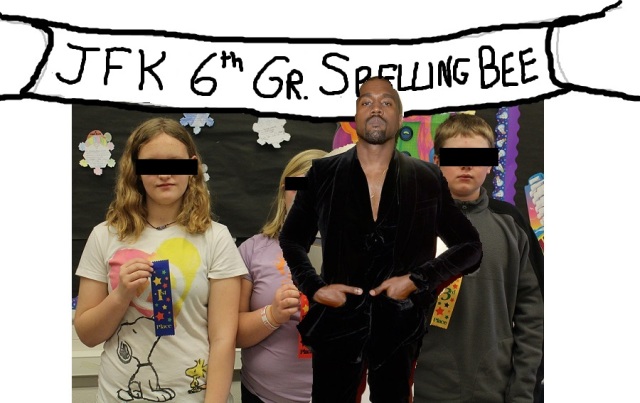 The music industry’s elite were astonished to see history repeat itself yesterday at the Grammy’s when Kanye West rushed the stage to demand winner Beck forfeit his Album of the Year award in favor of Beyoncé.

“It was Deja vu all over again,” said one onlooker who had witnessed a similar scene a couple of years ago when megalomaniac Kanye tried to wrest Taylor Swift’s award from her.

In the aftermath of the show, reports have started coming in from numerous sources claiming that Kanye had done the same thing to them.

“I had just passed out the ribbons to the first, second and third place finishers, when the door to the classroom suddenly burst open and Kanye West rushed in – I couldn’t believe it!” Mrs. Stumpleforth exclaimed. “He was screaming, “No way! Beyoncé shoulda won this, you mutha *$&%@^#   You know it, I know it, everybody know it. She was robbed, bitch!”

According to Mrs. Stumpleforth, the Beyoncé-obsessed star then ran to the front of the classroom, knocked the other children aside and snatched the blue ribbon out of Hannah’s hand.

The 11-year-old was too shook up to say much more than that the experience was, “kinda scary.”

Mr. West’s publicist read a prepared statement from the “artist”. “This is $#%^@*(.   Just let a brother get a little success and everybody wants to bring him down. Look what happened to Bill Cosby.”

Kanye himself could not be reached for comment as he and his wife, Kim Kardashian, were at the photographer having pictures taken for their annual Christmas card.