The Last Straw That Broke the Camel-back Sofa 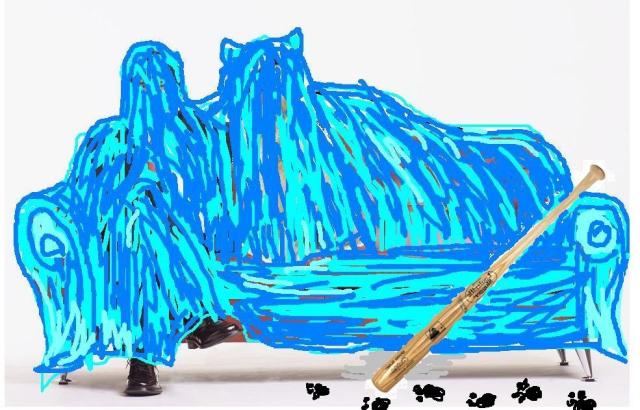 I had trouble getting my iPod to shut down after my workout tonight.  As a result, I ran screaming through the YMCA, smashed all the machines with a baseball bat and burned the place to the ground.

At first glance my reaction might seem a bit extreme, but it was entirely reasonable.  Let me explain.

I overslept this morning.   I had only a few minutes to apply mascara with one hand, brush my teeth with the other hand while simultaneously shrugging into an article of clothing suitable for covering nakedity in the workplace.

Realizing I was running late, our dog, Sally, helped me out by refusing to come in after her morning run.  After alternately cajoling and threatening her, she finally deigned to enter the house, bounding in to jump up on the sofa.  Whenever we cruelly abandon her (i.e. go to work) she cooperates by lying down on the sofa so we have to drag her to her crate.  Since it has been raining here, her dash to sanctuary left a perfect set of muddy Sally paw prints stretching from the door, across the pale, Berber carpet of the living room and onto the sofa.

Work was an unending litany of unhappy clients, uncooperative companies and unendurable sessions of being stuck on hold. I barely got out alive.

I went to the YMCA after work, hoping that exercise would release some of the frustration that had been building all day.  There wasn’t anything good on the little TV attached to my treadmill.  The news was depressing, Property Brothers was a rerun, and The Food Network had that show where the expert chef “helps” restaurant owners by cursing at them, loudly.  I plugged in my MP3 player instead.

I was walking fast on the treadmill, working up a good head of steam when the thing stopped dead in mid-stride.  I stepped forward against a backward movement that was no longer there and almost fell flat on my face.  Half of the machines in my row had stopped.  That happens there sometimes.  Modern athletic science cannot figure out why.

I got off and went to wipe the machine down, like a good little citizen of the gym, but the sanitizer dispenser was empty.

I took my ear-buds out and hit the center button on my MP3 player to turn it off.  It didn’t turn off.  With this model, if you press and hold the button for 1 nanosecond, it pauses the song.  If you press and hold for 3 nanoseconds, it starts it back up again.  You have to press it somewhere in the sweet spot, about 1.5 nanoseconds, to shut it off.   I couldn’t get it.  I pressed too short and it paused.  I pressed too long and it restarted.  Paused, then started.   Paused, then started.  It took 5 tries before I pressed the button JUST right so Goldilocks’ iPod would finally turn off.

That was it.  That was the last straw; the one that broke the camel’s back.

I stood in the middle of the Y, next to the dead treadmill and the empty dispenser, clutching my still-running iPod and felt a scream building up like molten lava inside of me.  If had had a Louisville Slugger in my hands, I wouldn’t have been responsible for the consequences.

You’ll be pleased to know I beat down the almost overwhelming impulse to have a screaming temper tantrum or go postal all over the joint.  But it was a near thing.  The ingrained habits of a lifetime came to my rescue.

I breathed deeply, calmed down, and tried to get a better sense of perspective on things.  After all, even if I’m stuck with that old sofa, that doesn’t mean I can’t get a snazzy new slipcover for it.  Anybody know where I can get a good deal on one?  It would need to be big enough for an 80″, camel-back sofa…with room enough to  cover its resident husband and dog.

Have you ever felt yourself teetering on the edge of an epic explosion?  Have you gone over that edge?  Would you like me to throw you a rope?

R-A-M-B-L-I-N-G-S, Ram...Blin!
View all posts by pegoleg →
This entry was posted in General Ramblings and tagged decorating with rage, dogs, humor, life, marriage, musings, my baser self, relationships. Bookmark the permalink.