Move Over Comcast And AT&T: Drucker-Net Is Here 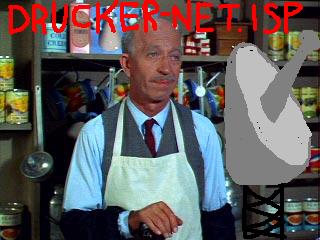 You people in the big cities have no idea – NO IDEA – what those in the sticks have to go through to stay connected and keep up some semblance of sophistication.

I was talking to my sister Terry the other day.  She said she hadn’t checked my blog because her internet connection was down again.

That COULD be true.  I know she has had lots of trouble with her service in the past.  She lives way out in the country.  But I knew they changed providers just a few months ago.  I suspected this was a flimsy excuse to avoid being grilled about my latest post.

I am not making up this next part – it’s practically a direct quote.

“They put a satellite dish up on  – you know our friend Henry Gilman? – the dish is up on top of his uncle’s corn silo.”  Terry said.

Yup.  They got that new-fangled internet down at Sam Drucker’s General Store.   Once you upgrade to Drucker-Net, your worries are over.

The Drucker-Net sales manager, Mr. Haney, gave them a really good plan.   They offer the Dee-Luxe Package for $29.99, but Terry thought that was a bit high, even with the Grabwell wringer-washer included.  She chose the Party-line Plan for only $14.99.  She just has to ring up Clara at the switchboard and she gets patched in to whatever site she wants.  That is, if nobody else in the RFD is using the internet.  Otherwise she has to check out whatever sites they check out.  It’s called tandem surfing – sounds exotic!

According to Terry, the only problem has been getting online late at night.  Mr. Ziffel ties up the line for hours.  He says he’s doing research on pork-belly futures.  It’s some site called “Porking Porkers”.

Outages are bound to happen, what with snow, wind or stray chickens.   If things get cattywampus, Terry just calls the Drucker-Net service department.   They are top-notch.   Eb will be over in a jiff to shimmy up the silo and knock the dish back into place.

With Drucker-Net, even the country mice will be as up-to-date on the latest technology as their city cousins.  Just because you’re not urban, doesn’t mean you can’t be urbane.

15 Responses to Move Over Comcast And AT&T: Drucker-Net Is Here