The Jacket: Entries, The End 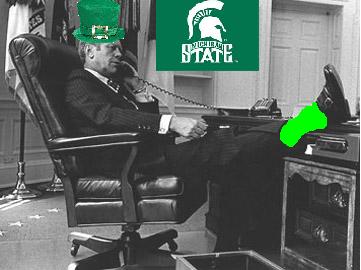 Famous Michigander (and blog-lover) Gerald Ford gets ready to read The Jacket entries before the big game.

Time to sit back, put your feet up on your desk and read the final 5 entries in The Jacket: Writing Competition.   They are all unusual, as usual.

Don’t forget to visit the blogs of those who choose to have blogs.  Not everyone does, of course, and there’s nothing wrong with that.

I have a Herculean task before me now; selecting the finalists.  I am going away for the weekend.  I will climb to the top of a tall mountain and seek spiritual enlightenment at an ashram, where I can select the finalists in peace and tranquility.  I will cleanse my body of all impurities, meditate and commune with nature.  Get centered.   Get in touch with my inner-blogger.  When I get back, rested and refreshed in body and soul, I will post the short list for your vote.

On the way back down the mountain, I may stop in at a St. Paddy’s day parade party in Michigan for some liquid centering.  Ohhmm  Ohhmm.

Don’t forget the wearing of the Green this weekend.  Not only will you be tipping your hat to St. Patrick, you’ll be showing your support for the Michigan State Spartans  (breaks into moving, tearful chorus of “On The Banks Of The Red Cedar”).

“No one ever quits Tom, it’s not an option.”

Tom couldn’t help but notice how Mr. McKinny’s extraordinarily large Adam’s apple bobbed as he spoke. “I’ll discuss with the others, and let you know at the lunch meeting,” he added gravely.

As Tom left the office he nervously fingered the slip of paper in his pocket that Mrs. Wojciechowski insisted he carry in case something happened to him. “Tom Wojciechowski.”

Everyone was at the lunch meeting. There was a tense murmur circling the table. Every now and then someone would look up from a hushed conversation and give Tom a worried glance. Again Tom fingered the slip of paper.

A collective gasp erupted from the lunch table, followed by envious chatter as the rest of the kids fidgeted in the itchy green jackets.

As Tom handed his jacket to Mr. Mckinny, a seventh grade girl at the far end of the table whined, “But Mr. Mckinny, you said no one ever quits Safety Patrol.”

Dave was given a job at MI5 because his dad was Mr. X, the head of MI5. Obviously, Dave knew his dad’s last name, but nobody else did. This is why Dave couldn’t have a last name, and he had to go around feeling like a not so glamorous Cher.

Dave’s dad soon realised his son was not cut out for any James Bond style spy work. Instead, his main job was going to the local shop to buy sandwiches and tea bags for all the other spies. Dave’s mum was pleased because it got him out of the house and she could have a margarita at 11am in secret.

Once, Dave drove his dad’s car off the end of Brighton pier because he thought it was a ‘scuba car.’ He had a habit of locking himself out of the MI5 building whilst out on his tea run.

Despite all this, one day Mr. X was forced the ask Dave to deliver a message to New York on a very secret mission. He didn’t like the idea, but all his other agents were busy with other things. And it wasn’t a particularly hard mission.

It was simple: deliver code word Tom Wojciechowski to an agent in Central Park at 1300 the next day.

On the flight over, Dave managed to lock himself in the toilet, and caused widespread panic when he started talking about shoe bombers.

He sat in Central Park eating a hot dog, waiting for 1300 to roll around. A beautiful woman wearing a green jacket walked up to him and sat down. She smiled and asked him his name. At first, Dave was flattered. Then he started to think that his dad would definitely give a fake name, in case the woman was a spy or something.

After talking for a while, he wrote the fake name and his number on the back of the hot dog wrapper. As she walked away, he decided it might not be such a good idea to give a stranger his number. He ran up to her and ripped the number from the bottom of the piece of paper she had in her hand.

The girl in the jacket was thoroughly confused, but decided to forget it. Everybody knew British people were a bit eccentric.

When the time came to hand over the code word, Dave had forgotten it. And he never saw the girl in the green jacket again.

Carla O’Kelly slid silently into the last row of seats as the memorial service began.  She pulled the green jacket closer around her mid-section, proud of the fact that it still fit her slender frame.  She had intended to forego the memorial service.  After all, she and her twin sister Darla had been estranged since they had fought over the same green jacket, and a man, forty years ago at a St. Patrick’s Day party.
Carla slid her hand into the pocket and touched the well-worn slip of paper.  Written on one side was a man’s name – Tom Wojciechowski.  On the other side was a phone number.

“Everybody is Irish on St. Patrick’s Day” he replied, not correcting her mispronunciation.  “My parent’s shortened the name when they arrived in this county.  It used to be O’ Wojciechowski.”

He laughed, raising a glass of green beer.  Carla laughed nervously and raised her own glass to her lips.  She found his combination of bright blue eyes and dark hair to be disarming.  He was wearing his own bright green polyester jacket in a pattern very similar to the jacket she wore – one borrowed from her sister for the occasion.  He had spotted the green jacket from across the room and made his way to her side.  He bought her a drink, something green and very strong, then another.  They chatted and drank, drank and chatted until Carla excused herself to the ladies room.  That’s when he handed her the slip of paper with his name and phone number.

At the conclusion of the memorial service, Carla made her way to the front of the room, standing briefly at the casket before moving to the row of immediate family members to offer her condolences.  She heard a gasp as she approached.  She reached into the other pocket for her folded Kleenex.

“I’m sorry for your loss, Darla” she said.

She was running late.

26 years and she’d never been late to a Daughters of the King monthly meeting. Today would not be the first!  She did a final mirror check, adjusting her wig and admired the fit of her new green plaid jacket with a narrow yellow stripe the exact shade of her dress.

Snatching a Kleenex from the box on the foyer table, she briskly walked out to her car. Without thinking, she folded the tissue into a tight, neat square and tucked it in her left pocket.

She may have driven slightly faster than legal, but she pulled into the church parking lot at exactly 7:56 a.m. certain that God would understand.  She was on a mission to do His work, after all.

The small Bible study classroom was brimming with DOK members when she walked in.

“Oh MaryAnn,” chirped Ruth, one of the oldest members, “don’t you just look the picture of spring?”

MaryAnn nodded politely, sliding into an empty seat.  Ruth was the church gossip; later she’d probably tell everyone within hearing “Bless her heart, did you see MaryAnn’s bright outfit? So inappropriate for Lent.”

The meeting started promptly at 8 with the opening prayer:

“Dear Heavenly Father, help us to be of service in the world even as your son Jesus served.”

MaryAnn murmured the words by rote. 26 years ago she’d made a commitment and MaryAnn was a person who kept her commitments. So she came each month to receive her prayer assignment and she prayed for them daily.

She just didn’t believe it helped.

The call for prayer requests came next. Ruth wrote each name on a slip of paper, folded it, and placed it in the prayer box to join the other names the church collected throughout the month. There was a time MaryAnn’s name would have been on a slip, but no more. She’d had her share of prayer.

The meeting ended with everyone pulling a name from the box.  As she exited the room, MaryAnn glanced at the name written in Ruth’s flourishing handwriting:  Tom Wojciechowski.

“What irony,” she thought. “Another cancer victim.”  His frantic wife shared the news in last Sunday’s service—advanced prostate cancer.
Absentmindedly, she slid the paper into her left jacket pocket, joining
the Kleenex.

Hello my name is Tom Wojcieowski

This web site was forwarded to me.

I remember the day I bought Theresa that jacket. She was beautiful.

Burn it or send me the Applebees coupon.

R-A-M-B-L-I-N-G-S, Ram...Blin!
View all posts by pegoleg →
This entry was posted in The Jacket and tagged blog, blogging, humor, shameless self-promotion, The Jacket, writing. Bookmark the permalink.

27 Responses to The Jacket: Entries, The End