Have you ever sent a post out into the blogosphere, absolutely convinced it was going to be Freshly Pressed? And then it wasn’t? 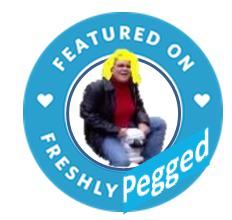 I’ve asked some fantastic bloggers to select the post that had them muttering,”THIS One Should Have Been Freshly Pressed.” A new blogger is featured each week to receive the coveted Freshly Pegged distinction. Participants will be awarded a genuine, simulated “Freshly Pegged” JPEG badge, suitable for posting in a place of honor on their blogs. Or not.

**UPDATE** I feel the need to clarify that Freshly Pegged and Freshly Pressed are not mutually exclusive awards for a blogger. As a matter of fact, most people featured here HAVE been Freshly Pressed at one time or another. If they haven’t been, they will be; they’re just that talented. This award is about a specific post that hasn’t received the attention it so richly deserves. My mission is to right that wrong. I’m fighting injustice like…like… a superhero. Like Robin Hood. Yeah.

The Jackie Blog.   With the exception of Lisa at the Big Sheep Blog, I’ve known Jackie longer than any other blogging buddy.  She jumped in here at WordPress on 1/1/11 when she took on the 365, Post-a-Day challenge.  Crazy I know, but that was Jackie – a crazy, fresh-faced kid.  You’d think somebody facing that kind of quota would resort to posting any old thing, but not her.  She rose to the challenge with such features as Lollipop Tuesdays, where she double-dog-dared herself to try new things.  She’s still challenging herself, and that’s one reason she’s on WordPress’ list of Recommended Humor Blogs.

When I popped over to Jackie’s to talk about this Freshly Pegged nonsense, I found she was up to her eyeballs in the comment ballyhoo that surrounds Freshly Pressed for her latest offering, My Struggle With Dance.    I guess that’s a nice honor, too.

Actually, we have a bit of a rivalry going on for number of times Freshly Pressed.  I have a sinking feeling she may have passed me up with this latest (now that the WordPress gods have abandoned me), but it would be too depressing to know for sure so I’ve adopted a don’t-ask, don’t-tell policy with her.

Check out all the fun at Jackie’s Blog, as soon as you read…

How I Almost Engulfed My Father in Merciless Hellflames

Last night marked the single, most epic baking disaster of my life.

It is a rare and sad occasion when I set out to produce a batch of wholesome chocolate chip cookies and instead almost produce a body count. I was a victim of my environment, really.

Having received an early morning phone call that my sister-in-law was having contractions, my family packed up and drove to my brother’s house for the weekend to wait on the arrival of a soon-to-be-bundle of girly joy and sunshine sparkles. But the labor was long and slow so instead of waiting it out at the hospital, my parents and I slept over at my brother’s house and anxiously awaited the real action.

Long and late into the evening, my sister-in-law had not yet been officially admitted and my old folks (being old folks, after all), passed out. My mother made it a conscious choice and retired in the upstairs bedroom. My father, however, fought the urge and failed, passing out on the couch to a rerun of “Cow and Chicken”.

Being designated the main line of communication for my brother’s updates and having a sudden urge to prove a wonderful aunt, I went about baking up a batch of chocolate chip cookies. Entirely out of my element, I gathered all the necessary accoutrements and began relishing in my domestic prowess. Halfway through, I realized I forgot to make sure my brother had baking soda and resorted instead to baking powder, which Google assured me was just as good as its soda-y counterpart so long as I tripled the measurement.

As I repeated batch after batch of terribly flat, terribly depressing excuses for cookies, I started to lose hope. The only solace I found was in my sister-in-law’s well-equipped kitchen, bursting with Pampered Chef delights. I remembered earlier in the day my mother had found a square, rubber nondescript and wasn’t sure where to put it when we were cleaning. Assuming it was a pot holder of some sort, I placed it in the appropriate drawer and went about the rest of my business. And since said rubber nondescript was in the pot holder drawer, my brain later reminded me of it and I used it to house the baking pan as the cookies cooled between batches.

When I was on my fourth batch of tears and resentment, I made my way over to the oven to pull out the disappointing fruits of my labor. Before opening the oven, I shot a glance over to the counter to make sure the rubber-nondescript-assumed-potholder was still there, ready for cookie landing.

Knowing there could be no other answer, I jumped to the oven to confirm my fears: the rubber had stuck to the bottom of the baking pan and it was now a melty, smoky mess in the heart of the oven. With the rubber dripping everywhere, my mother sound asleep upstairs, smoke filling the house quickly, and my father passed out on the couch, I had some quick decisions to make. Unsure of the best solution, I instantly went to wake my father for his assistance.

But it occurred to me that I wasn’t sure how to wake him in the middle of a smoke-filled room without instilling a sense of panic.

I stood over him, playing with the phrasing, wrapping my head around the syntax, and measuring which part of the explanation should come first. What does one say when bringing another out of deep sleep for assistance in a fire? Figuring there was no good way to do it, I resolved to let him sleep (and perhaps die a firey death) while I went solo. 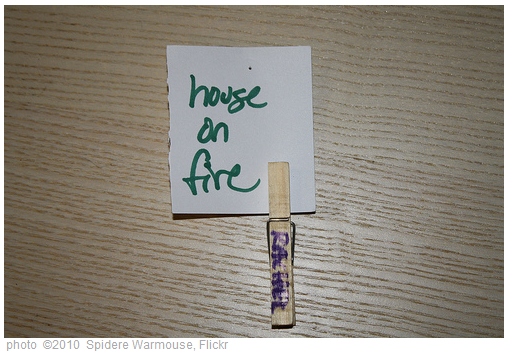 I yoinked the rack out of the oven and put it in the sink, where the maroon rubber nondescript melted into the basin, serving a grueling death for being mistaken for a worthy potholder only hours before. With the entire living room smelling like burnt rubber and smoke billowing from the oven, I ran around the house with real potholders in my hand, fanning the smoke away from my father’s head and the smoke alarm simultaneously.

I was a penguin, flapping silently and violently in an attempt to not disturb him.

After five minutes of pure freaking out, I was a sweating, heart-racing mess and thankful to the good Lord in Heaven for sparing me the lifelong burden of murdering my family. I cleaned the oven, tossed the cursed cookies into the trash, and put my feet up to bask in my narrow victory.

Interrupted by his overwhelming urge to take a leak, my father stirred on the couch and rose slowly. I calmly confirmed that my sister-in-law had officially been admitted to the hospital and he smiled. Thinking this was as good a time as ever to drop the bomb of his almost-death, I casually mentioned that I almost burned the house down because I didn’t know what to say if I tried to wake him in the middle of a smoke-filled room.

He sleepily replied: “You say ‘Dad, don’t worry – we’re okay – but the house is burning down and I need your help'” – and chuckled on his way to the bathroom.

Surprisingly lighthearted reply from a man who narrowly avoided engulfment in cookie and rubber hellfire. ♣

R-A-M-B-L-I-N-G-S, Ram...Blin!
View all posts by pegoleg →
This entry was posted in Freshly Pegged and tagged Freshly Pegged, freshly pressed. Bookmark the permalink.