Wearing My Heart On My Face 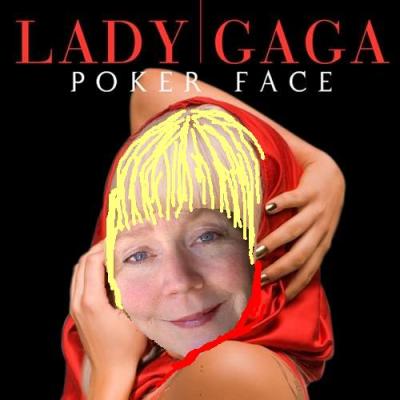 I don’t play poker.  I don’t even play Poker Face, because I don’t have one.  Most every thought, every emotion that flits through my brain shows up on my face in glorious, soggy Technicolor.

The other day I was watching an adorable baby on TV when I gradually became aware of what my face was doing: lips drawn up and back at the corners, eyebrows tilting up in the middle, brow furrowed.  I was smiling – not just any smile, but that “Aw, isn’t she cute?” sappy look you get when you see a baby.  But there was no baby in the room.  There wasn’t anybody else in the room.  I was all by myself, smiling at the idiot boob tube like Pavlov’s doofus.

My face betrays me everywhere I go.

I watch TV when I’m on the treadmill at the YMCA and my programming of choice is either HGTV or political commentary.  When a 22-year-old property virgin is about to make a big mistake in buying a house, I’m mentally yelling, “don’t do it!” as if she were my own daughter, Liz.  I know I’m sporting a worried frown.

If a talking head on the news is presenting some outlandish opinion about the opposing party as if it were gospel, my eyebrows are raised up so far in skepticism that they disappear into my hairline.

My body may be barely walking on the treadmill but my expressions are flat-out running – the entire gamut of emotions.  My face is getting a better workout than my gluteus, which remains maximus.

It was ever thus.

Physics class in high school was held in one of those lecture theater-style classrooms with ascending rows of desks.  I sat about 2/3rds  of the way up.  Whenever the class’s attention started to flag, the teacher, Mr. West, liked to perk things up by saying, “Class, lets see if we can get Peg to blush.”  Everyone would turn around and look at me.  Just stare.  Seconds later it was “Tomato, party of one?”

Then there’s the crying.  Mad or sad, happy or sappy; my eyes consider these to all be good reasons to start the rain-showers.  I can’t help it.

I’m not the innocent, 16-year-old flower I once was, so I don’t blush on command nowadays.  Unfortunately, the crying business has gotten worse.  Combine a lifelong waterworks tendency with a one-way ticket aboard the Hormone Express (I got on at the Menopausal Station) and I’m constantly on the brink of an emotional train wreck.

Being unable to mask my feelings has its drawbacks, as you might imagine.

Years ago the lease was coming up for renewal on an office we rented and the landlord and I were discussing terms.  He announced he wanted a big increase in the rent.  Try to guess my response.  Did I…

Cool, savvy businesswoman that I am, I started crying.  He was much better than I at masking his reaction, but I could practically hear his thinking, “There’s no crying in lease negotiations!”

On the very rare occasions when my husband says something with which I disagree just a TEENY bit, I carefully marshal my counterarguments.  I want to be like Solomon and get my own way without having to chop the baby in half.  Before I can phrase my response, however, Bill has taken one look at my face, read the skepticism (or horror) displayed therein and said, “What’s wrong? What? WHAT?”

I guess it’s time to cross “diplomat” off my list of possible midlife-crisis career changes and move on.  There’s no sense in getting upset about something I can’t change.  If I do get upset, however, you’ll know about it right, damn quick.

Just take a look at my face.

If you could see my face you would see happy, as in…HAPPY BIRTHDAY TERRY!  I am referring to Tar-buns over at Here & ThereSa; newbie blogger, long-time sister.  After an uncomfortable couple of weeks where we were the same age, today she is once again older than I and all is right with the world.

Stop by and leave her some birthday wishes.  Tar’s currently on vacation in Maine (Maine: not just a great state, but a great state of mind) but may be persuaded to reply if someone can pry the lobstah and beer from her buttery hands.

86 Responses to Wearing My Heart On My Face