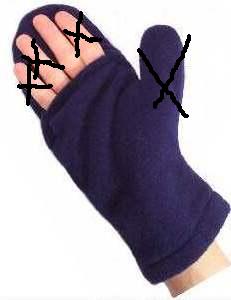 A new Wisconsin ad campaign has residents of Michigan saying “hands off our motto”.

The Wisconsin Department of Tourism’s website features a picture of the state’s outline crafted to resemble some sort of bizarre, knitted Elephant Man-esque mitten.   Wisconsin seeks to lure winter visitors with the graphic. http://www.travelwisconsin.com/

Michigan has long laid claim to the title “The Mitten State”, for obvious reasons. Michiganders learn to navigate using their right hand to represent the lower part of the state before they get to kindergarten.   Advanced lessons on use of the left hand to represent the Upper Peninsula are not covered until later grades.

In an AP article printed in the Washington Post, a Wisconsin Department of Tourism spokeswoman admitted, “We’re not the Mitten State. Michigan, they can own that.”  Not content to leave well-enough alone, the functionary continued with “We want to be known as the Fun State.”  This is clearly a taunt implying that eating cheese in the snow is somehow more fun than all the great things one can do in Michigan.

Things got ugly at a local tavern when Michiganders and Wisconsinites squared off over the mitten controversy.  Tempers were exacerbated by the Michigan State Spartans football team’s loss on Saturday to the University of Wisconsin Badgers.  The considered opinion of most people interviewed by this reporter, is that a questionable call late in the game stole a trip to the Rose Bowl from the Spartans, as surely as if the Badgers had come onto the field in ski masks, bearing sawed-off shotguns.

Some of the tavern’s Michigan contingent were heard making disparaging remarks about Wisconsin when comparing the size of the Door County Peninsula to The Thumb.  Door County residents were quick to respond that it’s not the size of the peninsula that matters; it’s what you do with it that counts.  Discussion turned into a shouting match comparing the attractiveness and availability of sexual partners in the winter in Escanaba vs Manitowoc (some comments involved moose), and quickly degenerated from there.

Wisconsin says they will steal some other state’s motto for their spring ad campaign, but for now, the mitten reference stays.   Michigan’s response involved one, un-mittened finger.

Peg-o-leg, reporting from Bay City, Michigan, smack-dab between the thumb and forefinger.

39 Responses to Gloves Come Off In Michigan/Wisconsin Mitten Kerfuffle